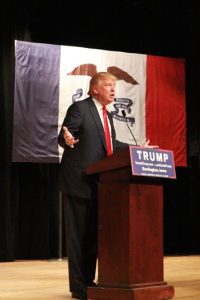 Despite the controversy surrounding Jan. 6 and investigations into the Trump Organization, former President Donald Trump is still seen as the frontrunner for the Republican presidential nomination in 2024.

Now, six months after a House of Representatives committee began investigating the insurrection that exposed a threat to American democracy, and a year after the deadly domestic terrorist attack, the committee will soon go public with their findings.

Mary Clare Jalonick of the Associated Press reported, “In the coming months, members of the panel will start to reveal their findings against the backdrop of (former President Donald Trump) and his allies’ persistent efforts to whitewash the attack and reject suggestions that he helped instigate it. The committee also faces the burden of trying to persuade the American public that their conclusions are fact-based and credible.”

Although the panel tried to assemble a bipartisan group of congresspeople, only two of the committee members come from the Republican Party, Rep. Liz Cheney (R-Wyo.) and Rep. Adam Kinzinger (R-Ill.)

Many Republicans have blasted the committee’s efforts, labeling it a partisan witch hunt trying to damage Trump’s reputation going into the 2024 presidential election, as well as hurt the GOP’s chances during the midterm elections of this year.

Often, the party out of power does well in the midterm elections.

Therefore, the nine-member panel investigating the Jan. 6 insurrection wants to have their investigation completed before the Republicans could possibly reclaim the House in January 2023.

The panel even plans to televise the hearings in which they will tell the American people what they discovered during their investigation.

Rep. Cheney said, “The full picture is coming to light, despite President Trump’s ongoing efforts to hide the picture. I don’t think there’s any area of this broader history in which we aren’t learning new things.”

Many people believe that Trump incited the riot, with the help of other Republican politicians and supporters of the Big Lie, which erroneously claimed that President Joe Biden won the 2020 presidential election because of widespread voter fraud.

Trump’s lies about widespread voter fraud have gone nowhere in the court system or in the political system.

However, that has not stopped his spread of the Big Lie.

Furthermore, the Big Lie has not stopped people from believing Trump’s lies about a stolen election.

Many critics believe that Trump’s incessant claims of stolen elections and GOP efforts to allegedly limit voting access in minority areas while placing Big Lie supporters in charge of some local elections, places American democracy in its greatest danger in centuries.

Nevertheless, Trump is still seen as the frontrunner for the presidential nomination in the Republican Party and defenders of democracy worry about what else can happen to America if Trump does not get his way in 2024.

Rep. Adam Schiff (D-Calif.), who also is on the Jan.6 committee, said, “I think that the challenge that we face is the attacks on our democracy are continuing—they didn’t come to an end on Jan.6.”

Cheney added, “I think this is one of the single most important congressional investigations in history.”

To debunk Trump’s false claims of election fraud, Rep. Bennie Thompson (D-Miss.) wants to “bring the people who conducted the elections to Washington and tell their story.”

For the Associated Press, Jalonick reported, “The committee has interviewed several election officials in battleground states, including Arizona, Georgia, Michigan and Pennsylvania, about Trump’s pressure campaign. In some cases, staff have traveled to those states to gather more information.

“The panel also is focusing on the preparations for the Jan. 6 rally near the White House where Trump told his supporters to ‘fight like hell’—and how the rioters may have planned to block the electoral count if they had been able to get their hands on the electoral ballots.”

The subpoenas demand that the Trump children testify in an ongoing civil investigation into the Trump family businesses.

The civil investigation looks “into the valuation of properties owned or controlled” by the former president and his company, the Trump Organization.

The Associated Press reported, “The Trumps are expected to file court papers seeking to quash the subpoenas, setting up a legal fight similar to the one that played out last year after James’ office subpoenaed another Trump son.

“Trump sued James last month, seeking to end the investigation after she requested that he sit for a Jan. 7 deposition. Trump’s lawsuit, filed in federal court, alleges that the probe has violated his constitutional rights in a ‘thinly-veined effort to publicly malign Trump and his associates.’”

According to reports, the Trump children will refuse to comply with James’ subpoenas.

The Associated Press reported, “Although the civil investigation is separate from a criminal investigation being run by the Manhattan district attorney’s office, James’ office has been involved in both. Earlier this year, former District Attorney Cyrus Vance Jr. gained access to the longtime real estate mogul’s tax records after a multiyear fight that twice went to the U.S. Supreme Court.

Before he left office at the end of last year, Vance convened a new grand jury to hear evidence as he weighed whether to seek more indictments in the investigation, which resulted in tax fraud charges in July against the Trump Organization and its longtime CFO Allen Weisselberg.

Weisselberg has pleaded not guilty to charges that he and the company evaded taxes on fringe benefits to company executives.