Arizona Makes it Illegal to Film Police Within Eight Feet 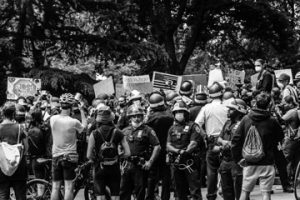 A new Arizona law makes it illegal to record police if not more than eight feet away.

If a person in Arizona films police encounters with civilians and they are less than eight feet away from the encounter, they may face misdemeanor charges.

Infamously, George Floyd’s murder went viral after bystanders outside of Cup Foods in Minneapolis filmed former officer Derek Chauvin killing Floyd after kneeling on his neck for over nine minutes.

That video spurred protests around the world, demanding an end to police brutality, and what many see as different treatment of Blacks and Whites by some police officers.

Murjani Rawls of The Root wrote, “Since then, certain political representatives like New York [Mayor] Eric Adams have complained about the distance under which citizens can record their interactions with officers. Arizona Gov. Doug Ducey signed a bill on Wednesday that would make bystanders stand a minimum of eight feet away from the action…

“If a police officer gives one verbal warning for someone to move back, they risk being charged with a misdemeanor and incurring fines of up to $500, jail time of up to 30 days, or probation of up to a year.”

Politicians arrived at the eight-foot distance because that is the distance that protestors must stand away from the entrance of abortion clinics.

The exception to the eight-foot rule is when filming on someone’s private property.

If the person recording on private property is authorized to be on that property, they can remain.

Nevertheless, police can require those filming to leave the property if “law enforcement officer determines that the person is interfering in the law enforcement activity.”

Despite the new Arizona law, First Amendment experts say that the new law could violate freedom of speech laws and the right to peaceful assembly, especially when on public property.

“There is zero evidence in the record that this law actually addresses a problem,” said ACLU of Arizona attorney, K.M. Bell. “We are investigating all possible options for addressing this unconstitutional law.”

He added, “We’re talking about people being in public and a place they have the right to be. We’re not talking about, like somebody breaking into the (National Security Agency).”

Bell said that he believes that it is unlikely that other states will follow Arizona’s lead with the eight-feet rule because of the questions of constitutionality.

Mickey Osterreicher, who serves as general counsel for National Press Photographers Association (NPPA), described the law “unworkable” and “arbitrary” because it does not consider situations like protests.

Osterreicher said, “Giving [police] the authority to tell someone to stop recording is a violation of the First Amendment.”

The NNPA, along with several other organizations and media entities, signed a letter last week asking the governor to veto the bill.

Osterreicher said, “We had hoped to be able to do this the easy way, unfortunately it seems that the state of Arizona has done this the hard way.”

He added, “What happens when you’re in situations like we saw during all those protests for the past couple of years, where you have multiple people with cameras? We’re not just talking about journalists. And you’ve got multiple police officers. Is everyone going to be running around with a ruler?”

Media lawyer Dan Barr of the First Amendment Coalition of Arizona said, “Everyone thought that this bill was dead. It’s crazy that it sprung to life at the end of the session. I think it’s something where, once the law gets challenged, it will fall.”

Many say that murderers like Chauvin might get away with murdering unarmed Black Americans if not for recorded video.

However, state Rep. John Kavanagh (R-Ariz.) who sponsored the bill and is a former police officer said that the technological advancements of camera phones will not make it impossible to film police encounters from eight feet or more.

Kavanagh said, “Police officers have no way of knowing whether the person approaching is an innocent bystander or an accomplice of the person they’re arresting who might assault them.

“Consequently, officers become distracted and while turning away from the subject of the encounter, the officers could be assaulted by that subject or that subject could discard evidence or even escape.”

But could the officer still be assaulted from over eight feet away?

The Phoenix police department is now under investigation by the Department of Justice because of allegations that officers used excessive force and abuse when dealing with the homeless population.

Maupin said, “Proximity is not a luxury in documenting the actions of officers who engage in acts of brutality. Sometimes the victims and the bystanders have no choice but to be within the proximity that the bill now prohibits.”

But Kavanagh said that there needs to be a law on the books that keeps officers protected from people who “either have very poor judgment or sinister motives.”

Kavanagh added, “I’m pleased that a very reasonable law that promotes the safety of police officers and those involved in police stops and bystanders has been signed into law. It promotes everybody’s safety yet still allows people to reasonably videotape police activity as is their right.”