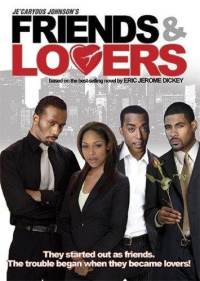 Friends & Lovers is one of many successful plays for Houston’s Je’caryous Johnson.

In an effort to escape the devastating images of several Northeastern homes submerged in water from the wrath of Hurricane Irene, I turned to BET for an entertaining diversion.  I expected to see the usual afternoon movie such as Ray or B.A.P.S, but was surprised to find a stage play starring Vivica A. Fox splashed across the small screen.

It was not the first time I stumbled upon a broadcast of a stage play, traditionally dubbed chitlin-circuit gospel plays, or more recently described as urban theater, but the frequency in which the plays have popped up—in movies, on TV, and the subject of books—are indicative of their popularity.

In Donald Gray’s “There’s a Stranger in My House,” Fox and Clifton Powell play the parents of a young woman, who loses herself when she becomes manipulated by the man of her dreams and struggles to redeem her morals. Her journey and that of her co-stars is led through R&B solos, silly physical comedy from Martin’s Carl Payne, and preachy messages on family values. All the ingredients used to make a gospel play, or in the case of Tyler Perry, a movie and TV show as well, taking the art form to new heights.  But do theater buffs see urban theater soaring into mainstream territory?

“Tyler Perry is successful because he’s able to cater to his niche market in a broader way,” says Garrett Cassells, Atlanta-based playwright and CEO of Urban Ink Productions. “We serve a niche market and the craft has been perfected by staying true to [that] niche market. [In] a niche market we can definitely support ourselves, as long as it’s marketed and promoted right.”

Promotions for urban theater run the gamut from traditional marketing schemes—radio, posters, YouTube trailers—to word-of-mouth from church members and plugs on Twitter and Facebook. Usually resulting in nearly or completely sold-out shows in the biggest theaters around the country including the Lyric Opera House, a 2,564 seat auditorium in Baltimore, which was filled with a predominately Black audience; mostly middle-aged and young adult females for Je’Caryous Johnson’s 2007 play, “Men, Money and Gold-Diggers,” The New York Times reported.

Perry may be credited for steering urban theater onto three different tracks, but Talbert and Johnson are not far behind. Talbert is a 20 year veteran of urban theater; writing and producing 13 plays, starting with his 1991 stage play “Tellin it Like It Tiz.” Since then he’s parlayed his craft into film.  He directed the Ice Cube comedy First Sunday, television (“Stage Black” reality show on TV ONE network and BET broadcasts his stage play DVDs) and four novels, grossing $75 million over the last decade, according to Talbert’s estimate.

Johnson, CEO of I’m Ready Productions is recognized for being the first to adapt Eric Jerome Dickey’s best-selling romance novel “Friends and Lovers” into a stage play and writing a companion novel to the “Gold Diggers” stage play.

Johnson’s two year quest to produce his first movie in his native Houston has him thinking beyond his urban audience and aims to appeal to a broader audience on the big screen.

“I don’t want my movies to be thought of as, ‘Oh, it’s a black movie,’” Johnson told the Houston Chronicle.

“They’re real shows, but they don’t have the wherewithal to last the test of time; its no ‘Raisin in the Sun’,” says Wade, who has appeared in Howard Community College’s Rep Stage production of “Anna Lucasta” and “South Pacific.”

Wade argues that urban theater does not have the mass appeal of traditional theater shows like “The Color Purple” because of the narrow audience-base and lack of authenticity with themes.

“[The stories are] subsets of subsets and doesn’t appeal [to] international audiences,” he adds, reinforcing the idea for “intelligent” theater with his new play “From ‘Superman’ To Man” based on the novel by author and scholar Joel A Rogers.

Cassells, currently touring his play “Skeletons in My Pastor’s Closet” around Atlanta, counters that while urban plays may have similar themes it does not mean the story will be the same.

“The theme may be similar,” he says. “But there are countless ways to tell that story. Different preachers introduce Jesus in different ways.”

Some critics have reached their limit with this genre’s saturation of urban productions, prompting  Yahoo Contributor Ayanna Guyhto’s  article “Five Reasons Why African American Stage Plays Are Not Respected in Hollywood,” which states that the characters are too one-dimensional.

“The Vixen, The Matriarch, and The Stud are all recurring characters who make appearances in so many different stage plays across America,” writes Guyhto. “…these characters continue to preserve the myth that all Black men are emotionally or physically ‘unavailable’ and all Black women are needy or conniving.”

Perry’s characters were sophisticated enough to attract Carlton Molette, a professor of dramatic arts and senior fellow of the Institute for African American studies at the University of Connecticut, to include them in teachings, specifically the stage version of “Madea’s Family Reunion” alongside works by August Wilson and Amiri Baraka.

Urban theater has captivated audiences for generations and the plays—that include a mix of R&B or gospel-solos and duets, infused with preaching continue to thrive; selling out shows in some of the biggest theaters across the country. An appeal that Perry has turned into an empire