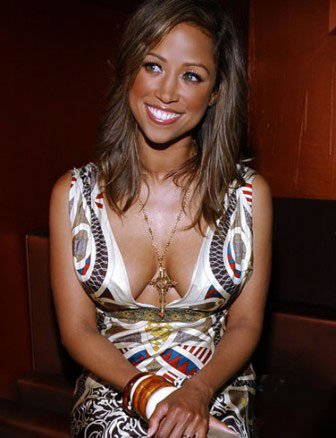 Actress Stacey Dash leads the pack for our top 10 hottest women of 2011.

It’s more than obvious that all of these women look and are hot beyond belief. But there are other factors such as how they carry themselves, intellect, their body of work, personal life, their special talents in their chosen field of work and their national and worldwide appeal. Three of the Top 10 Hottest Women of 2011, Gabrielle Union, Meagan Good and Taraji P. Henson will star together in the movie Think Like a Man, based off of the best-selling Steve Harvey book Act Like a Lady, Think Like a Man. Others come from the music industry, modeling and some possess talents from all of the above.

It’s hard to believe that it’s been since 1995 when Dash starred as Dionne Davenport in the hugely successful movie and later the television series “Clueless” with Alicia Silverstone and Brittany Murphy. It would set the pace for a career that would garner roles for Dash due to not just her talent and beauty, but her youthful looks as well. Dash played the 17-year-old Dionne Davenport while she was in her late twenties.

What’s not hard to believe is that Dash still remains one of the most, spectacular, beautiful, youthful and yes, hottest women in Hollywood as she makes her way to the top spot on the Top 10 Hottest Women of 2011. Well into her 40s now, this is one starlet whose beauty and hotness gets better with age. With a solid body of work in movies and television, Dash’s youthful looks even today continue to get her regular work. In the past few years she has starred in two successful TV series, as Camille Rose in “The Game,” and as Val in “Single Ladies.” Dash left “Single Ladies” this summer due to personal and family reasons. She continues to roll just having completed production on the USA Network dramas “House Arrest” and “Dysfunctional Friends.”

One look at Union and all you can think of is just how hot this actress and model and former cheerleader from Omaha, Neb. is and how a list of the Top 10 Hottest Women of 2011 would not be complete without her. Known for television and movie parts that are opinionated and strong, according to imdb.com, Union says that, “Hollywood needs to recognize all shades of African American beauty.”

The UCLA honors graduate with a degree in sociology, who is fluent in Spanish has shared the big and small screens with some of Hollywood’s biggest and best actors and actresses. She broke ground on the popular NBC TV show “Friends” as the first African American love interest on the show. It was for only one episode, but the general viewing audience took notice. She has appeared in such popular shows as “Family Matters,” “Moesha,” “Saved by the Bell,” “The West Wing,” “Star Trek: Deep Space Nine,” “7th Heaven,” “ER,” and “Ugly Betty.” Union has also been featured on the big screen in Bad Boys II, Bring It On, Cadillac Records, and Deliver Us From Eva.

Union has been nominated for numerous awards and won the 2008 Black Reel Award for Best Ensemble for Cadillac Records, and the 2006 Palm Beach International Film Festival Award for Best Actress in the movie Neo Ned.

It is almost impossible to have a list of the Top 10 Hottest Women of 2011 or any list of hot women without including Berry. The 46-year-old Academy Award winner is often regarded as one of the most beautiful women in the world and maybe the universe. Berry’s work in movies and television spans three decades. She has also graced the cover of hundreds of magazines. Berry has gone from being crowned Miss Teen All-American at the age of 17, to being an A-list actress who has starred in such blockbuster and highly acclaimed films as Spike Lee’s Jungle Fever, Boomerang with Eddie Murphy, Losing Isaiah, and Introducing Dorothy Dandridge, where she earned a Golden Globe Award. She also appeared in The X-Men Trilogy movies and won an Oscar for Best Actress for Monster’s Ball. Berry was also the first African American female to be a Bond Girl in the James Bond movie, Die Another Day. Berry isn’t just one of the Top 10 Hottest Women of 2011; she may be one of the hottest women of all time.

Sheer hotness isn’t the only criteria for making the Top 10 Hottest Women of 2011, but brains as well, and that’s where Lathan wields both. After graduating from the University of California at Berkeley with a degree in English, Lathan opted out of a possible career in law by enrolling in the Yale School of Drama where she was trained and performed in various Shakespeare plays.

Since then Lathan has carved out a nice career as an actress and has shared the stage and screen with such leading men as Eddie Murphy, Martin Lawrence, Wesley Snipes, Matthew Broderick, Matt Damon, Jude Law and Taye Diggs.  Along with her work in film and Broadway, Latham can be seen (or heard) each Sunday night on television as the voice of Donna Tubbs, the wife of Cleveland Brown on the popular FOX animated series, “The Cleveland Show.”

The legal field’s loss has been the entertainment industry’s gain as this true beauty is destined to be on many Top 10 Hottest Women lists for years to come.

Since making her acting and big screen debut in the film ATL opposite recording artist Tip “TI” Harris, London has been hitting her stride and fans are taking notice of this beauty from Los Angeles and member of the Top 10 Hottest Women of 2011. London is such a talent that according to the website imbd.com, she was offered the part of Melanie “Mel” Whitfield in the 2007 holiday movie This Christmas featuring Delroy Lindo, Idris Elba, Loretta Devine and Regina King without an audition. Since then London has had featured roles on “Everyone Hates Chris,” “Entourage,” “90210,” and the Tyler Perry film Madea’s Big Happy Family. London may be a force to be reckoned with in the future as she says that her goal in five years is to win an Academy Award.

Besides Berry, Henson may have one the most diverse resumes to go along with her hotness in making the Top 10 Hottest Women of 2011. For the Academy Award nominee for Best Supporting Actress for her role in The Curious Case of Benjamin Button with Brad Pitt, there are very few parts that this stunning single mother can’t and won’t take on. From her current stint as the tough Detective Carter on the CBS television drama “Person of Interest” to other big screen roles in Tyler Perry’s I Can Do Bad All By Myself, and Hustle & Flow where she won a BET Award for Best Actress, Henson has proven that she’s not afraid to take on anything challenging. That’s quite a feat when you consider the limited amount of acting jobs available for African American women today.

Good has been acting since she was four and has appeared in several family and kid-friendly shows such as the “ABC Afterschool Special,” “Touched by An Angel,” “Moesha,” “The Parent Hood,” and “My Wife and Kids.” Good is now grown up and has blossomed right before our very eyes from a cute child actress to one of the hottest African American actresses in Hollywood earning her a spot on this year’s Top 10 Hottest Women.

And Dungeon & Dragons geeks will be pleased to know that Good will play the part of Karima in the movie Dungeons & Dragons: The Book of Vile Darkness, which is in post-production and has no release date as of yet. Good has mentioned that she would like to have the leading role as the late singer Aaliyah in a biographical film.

But Good’s hotness only goes so far. She has said in several interviews that she would not take on acting jobs that might “disappoint God,” calling herself a spiritual woman and that’s more than good enough for her fans.

She’s multi-talented, a dominant force in the entertainment industry where everything she touches seems to turn into gold, and is one of the few women who can look unbelievably hot pregnant! That’s Beyonce’ for you as she bursts through the list of Top 10 Hottest Women of 2011. The curvaceous “Bootylicious” diva who told all the single ladies to tell their men to put a ring on their finger, can only have us worship her from afar as she had world renowned rapper Jay-Z put a ring on her finger a few years ago.

As one of this year’s Top 10 Hottest Women, Beyonce’ managed to have another spectacular year. She’s been nominated for a couple of 2012 Grammy Awards for Best Rap Song Collaboration for “Party,” and Best Long Form Music Video for her “I Am… World Tour.”

The announcement of her pregnancy made headlines all over the world and broke a Twitter record for most tweets per second and shattered a few Google search records. And soon she’ll no doubt be on the list of Top 10 Hottest Moms for 2012.

The Victoria Secret model makes the Top 10 Hottest Women of 2011 list as maybe one of the most exotic. This hottie has been called a rarity as one of the few supermodels not born in Brazil or Germany, but in Walker’s Road in the capital city of George Town in the Cayman Islands. Ebanks, who is of African, Caymanian, Jamaican, Irish and Native American heritages, has appeared in numerous advertising campaigns for Tommy Hilfiger, Ralph Lauren and Levis Jeans. According to various sources, Ebanks was discovered while walking through the turnstiles at Six Flags Great Adventure in Jackson Township, N.J. at the age of 17. Since then she also appeared in the 2007 Sports Illustrated swimsuit issue, and on television in “How I Met Your Mother,” “South Beach” and the third season of “Celebrity Apprentice.” In 2008 Ebanks was listed as the 12th highest paid supermodel at $2.7 million according to Forbes.

Soft, smooth, silky, soulful, spiritual and often just flat-out poetic are just some of the ways you can describe Scott and her music; a fine trait for being on the Top 10 Hottest Women of 2011. Her June 2011 release “The Light of the Sun,” her fourth release and first since 2007, channels some of the sounds of the 1970s, which is capped off with a cover of 70s disco and R&B icon Evelyn “Champagne” King’s “Shame” featuring Eve & The A Group. The three-time Grammy Award winner and actress was also featured on the Kirk Franklin video, “I Smile” earlier in 2011.