Who Should Obama Choose as His Running Mate? 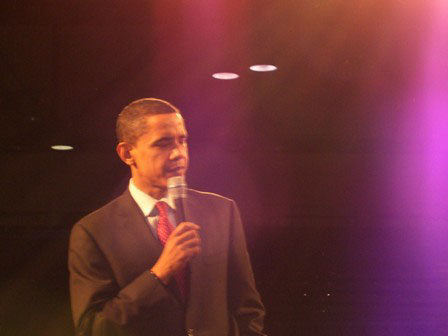 Advisors say Obama is considering candidates with a military background as his running mate/(Todd A. Smith/Regal Magazine)

Who Should Have Barack’s Back?

Now that the dust has settled on Barack Obama’s historic nomination as the Democratic candidate for the presidency, an equally important challenge presents itself.  Who should Obama choose as his running mate for the November election?

Hillary Clinton proved herself to be a formidable foe during the Democratic primary, inspiring approximately 18 million voters, especially women, to support her with frenzy-like enthusiasm.  Many of her supporters even went so far to say that they would vote for presumptive Republican nominee John McCain if Obama and not Clinton was on the ballot.

While Clinton has enjoyed a huge advantage among White women and blue-collar Whites, is she the perfect fit for Obama in November?  Many political pundits and politicians, including former President Jimmy Carter, believe this would be a disaster because of all the baggage that comes with the Clinton name.

Furthermore, many believe when frustrated Clinton supporters look at the issues and see how different Obama and McCain are on issues such as the economy, the Iraq War and abortion rights, they will tone down their disgust and join the Barack bandwagon.

Additionally, many Republicans, conservatives, and the all-important Independents despise Clinton, according to the Associated Press.  Some even believe that having Clinton on the ticket will encourage conservatives to vote for McCain, despite having doubts that he is a true conservative.  And Independents comprised a quarter of all voters in the 2004 presidential election.

According to an Associated Press-Yahoo News Poll, 32 percent of Independents strongly dislike Clinton.  In addition, 67 percent of Republicans have a very unfavorable view of Clinton, 24 points more than Obama.  However, Clinton does 23 points better than Obama against McCain among Hispanics, 18 points better with Catholics and 14 points better with elderly Whites, and each group will play a significant role on the outcome come November.

Another possibility could be the junior senator from Virginia, Jim Webb.  Obama is often criticized by the McCain camp for not having a military background and a lack of experience on foreign affairs.  Webb could possibly soften this criticism because of his successful career in the armed forces.

Webb served his country valiantly in the Vietnam War and was awarded the Navy Cross, a Silver Star, two Bronze Stars and two Purple Hearts.  He also served under the Ronald Reagan administration as secretary of the Navy.  Just as important is his southern roots, which could possibly appeal to blue-collar Southern Whites who largely supported Clinton in the primaries.

Despite his military experience, Webb is not without controversy.  He is infamous for an encounter with President George W. Bush regarding his son’s military service in Iraq.  And on March 26, 2007, his aide Phillip Thompson was arrested for carrying Webb’s loaded pistol as he entered the Russell Senate Office building and also for carrying unregistered ammunition.

Dionne wrote that Biden is from Pennsylvania, which will be a crucial state for the Democrats in November.  He has run for the presidency twice, enduring the media scrutiny that comes with seeking the highest office in the land.  He is also Catholic and from a blue-collar background.

Obama could also choose former Vice Presidential candidate John Edwards because of his appeal to Southern voters.  Or maybe even New Mexico Governor Bill Richardson to appeal to Hispanic voters.  Hispanics will be a crucial demographic for Obama to win because little separates McCain and Obama on immigration, with both favoring a path to citizenship for illegal immigrants.

Regardless of who Obama chooses as his running mate, it will be crucial that he makes the correct choice and appeal to a broader audience if he is to be successful in his bid to become the first Black president of the United States.