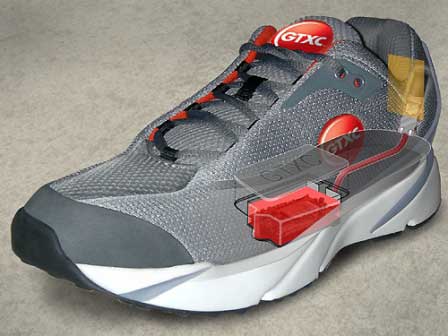 A new shoe has been developed to track lost Alzheimer’s patients.

Getting in Step in the Fight Against Alzheimer’s

The importance of being in “your right mind” really hits home if one has ever come in contact with a relative or friend who is suffering from the effects Alzheimer’s.

This debilitating disease, which is the leading cause of dementia, robs the patient and their loved ones of happy memories and future plans because the first symptoms of the disease involve an increase in forgetfulness and mild confusion.

Over time, the effects of Alzheimer’s has a growing impact on memory, speaking and writing ability and problem solving, and it is reaching epidemic proportions as the population ages.

According to the Alzheimer’s Association 2009 report, one in eight persons 65 and older has Alzheimer’s and that number increases to nearly one in two persons aged 85 and older.

Generally, women are reported at greater risk to suffer from the effects of Alzheimer’s because they tend to live longer.

According to researchers at the Johns Hopkins Bloomberg School of Health, more than 26 million people worldwide live with Alzheimer’s and this figure is set to exceed 106 million by the year 2050.

Getting a handle on monitoring Alzheimer’s patients is critical because those suffering from the effects of Alzheimer’s can easily become disoriented and confused. Often, they wander away from their homes and have difficulty finding their way back.

Now, there is a shoe that has been equipped with a GPS system that can be used to track the wayward patient who is dealing with the effects of Alzheimer’s.

It represents, according to CNN, the latest in a wave of assisted living devices, ranging from home sensor systems to pill boxes with the primary purpose being to keep Alzheimer’s patients safe and their caregivers less stressed.

The GPS system is embedded in the shoe and it allows for the patient to be tracked down instantly if they wander.

GTX Corp, a firm that specializes in the development of miniaturized GPS tracking devices, has collaborated with Aetrex, a footwear company, with the development of the shoe and the millions who care for Alzheimer’s are very encouraged.

Details are still being worked out regarding the costs for the shoes, but a monthly service is also being considered to provide caregivers with alerts if the Alzheimer’s patient wanders outside of a set boundary.

And not only are new products stepping up to address Alzheimer’s, the Alzheimer’s Association continues its effort to address the disease and to motivate those dealing with the effects of Alzheimer’s to increase the exercises and activities that help to keep minds as sharp as possible.

And while there is no cure, there have been significant strides in the research regarding Alzheimer’s and its causes and potential cures.  It is clear that staying physically active and mentally engaged are two ways to keep the effects of Alzheimer’s at bay, especially if you have a loved one who is stricken by the disease.

In the meantime, if you have a loved one with Alzheimer’s, investing in a product that can help to keep track of their movements if they wander is a step in the right direction.