Lack of Diversity Leads to Lack of Boko Haram Coverage 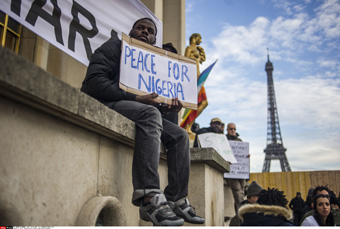 A man holds a sign reading “Peace for Nigeria” as demonstrators gathered at the Trocadero Place to protest against Boko Haram after a large-scale attack in Baga, which straddles the borders of Chad, Nigeria, Niger and Cameroon, where as many as 2,000 people were massacred in a raid (Photo Credit: Sipa via AP Images).

The Rwandan genocide represented one of the worst atrocities in human history.

Residents took sides based on skin tone (Hutu vs. Tutsi) and slaughtered neighbors and relatives if they did not represent the correct hue.

When Paul Rusesabagina (Cheadle) asked Colonel Oliver (Nick Nolte) if media coverage would encourage Americans to get involved in the Rwandan conflict, Colonel Oliver said that no one would care because they were not even niggers, they were Africans.

The reason Boko Haram in Nigeria has not received the same attention as terrorism in European countries is the same reason Natalee Holloway received more attention when she disappeared than her Black counterparts.

It is because the people making the decisions on what matters usually look like Holloway and the people in Paris and not the people in Africa or descendants of Africa.

According to the American Society of News Editors (ASNE), “15 percent of participating organizations (say) at least one of their top three editors is a person of color.

Although the number of minority journalists is increasing, until newsrooms reflect the communities they serve, many stories that are important to minorities will continue to be underreported or not reported at all.

Those like J. Peter Pham who worked hard to draw attention to those suffering at the hands of Boko Haram in Nigeria deserve praise.

And news organizations and politicians who dropped the ball on Boko Haram in Nigeria deserve the pressure they have received for not giving the Nigerian struggle the same attention as the French struggle.

According to Pham’s article on CNN.com, “On (Jan. 11), at almost the same moment that dozens of world leaders linked arms and led millions of people through the streets of Paris to commemorate the 17 victims of last week’s terror attacks in France, explosives carried by two young girls ripped through a mobile phone market in the northeastern Nigerian town of Potiskum.

“The blasts, which killed three people besides the bombers and injured 46 more, came just a day after another bomb, strapped to a girl described by witnesses as about 10 years old, exploded in a busy market in the city of Maiduguri, killing at least 20 people.”

Therefore, it is vital that all in mass media and all political and community leaders show the same amount of empathy for victims of terrorism, even those who do not look like them or speak the same language.

While many will continue to view victims simply by the color of their skin, the majority of us must still look at all people as brothers and sisters.

As King stated, “We must live together as brothers…or perish as fools.”  Everyone that suffers at the hands of extremists, from Africa to Europe, is our brothers and sisters.  And they should all be treated with the same love, regardless of color or country.