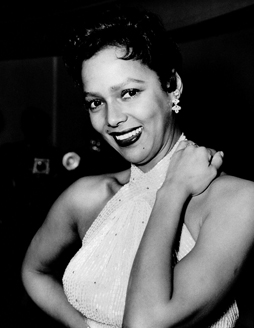 In this file photo from April 11, 1956, actress Dorothy Dandridge is shown at her press reception at the Savoy Hotel in London.  Dandridge was the first Black woman to be nominated for a Best Actress Academy Award (Photo Credit: AP Photo, File).

Dorothy Dandridge: Ahead of Her Time (Black History Month Profile)

When it comes to true success, timing is everything.

Michael Jackson benefitted from the advent of music videos and networks like BET, MTV and VH1.

Beyoncé benefitted from the popularity of social media, which to some degree negated the need of traditional marketing of a pop star.

But for every Beyoncé and Jackson, there are the Jackie Wilsons, Nicholas Brothers and Dorothy Dandridges who had all of the talent and physical attributes to be iconic, but because of societal restraints are often forgotten by the current generation.

So in honor of Black History Month, RegalMag.com shines the spotlight on Dorothy Dandridge (Nov. 9, 1924-Sept. 8, 1965), the first Black sex symbol and the first Black woman to receive an Oscar nomination for Best Actress.

Dandridge was destined for fame and fortune from the beginning.

Though shy and introverted as a child, Dandridge formed a singing group called the Wonder Kids with her outgoing sister Vivian Dandridge.

Her mother Ruby Dandridge, who was a comedian and actress herself, began coaching Dandridge at a young age to overcome her shyness and the Wonder Kids began performing throughout the South, according to “The African American Encyclopedia.”

Frustrated with a lack of opportunities down South, Ruby moved her daughters to Hollywood to capitalize on the entertainment possibilities in Los Angeles.

While Ruby worked as a maid during the Depression in Los Angeles, her daughters augmented her salary with the money they made performing.

This period of financial struggle made Dandridge take her finances very seriously throughout her illustrious, but short-lived career.

With the addition of Etta Jones in 1934, the Wonder Kids changed their name to the Dandridge Sisters and began touring the country and performing with such stars as Duke Ellington and Cab Calloway.

During her tenure at Harlem’s Cotton Club, Dandridge met and married her first husband, Harold Nicholas of the famed Nicholas Brothers.

The union was rocky and short and resulted in the birth of a special needs daughter.

Disillusioned with a failed marriage and the struggles of raising a special needs daughter, Dandridge began focusing more on her career because of financial difficulties after her divorce.

A performing engagement at the New York club La Vie en Rose led to major publicity in magazines like Look, Esquire and Life.

Unfortunately, the ultimate decline in movie roles because of the lack of opportunities for Black actresses and having the wrong men in her life would lead to her untimely demise.

In 1951, Dandridge played an African princess in “Tarzan’s Peril.”

The 1954 smash film “Carmen Jones,” which was the most successful all-Black film of that era, made Dandridge and Oscar-nominated superstar.

Unfortunately, film opportunities began to dwindle after that high mark in her career.

Her 1957 movie “Island in the Sun,” led to boycotts and legal challenges because a White man in the picture held her romantically.

In 1959, she worked again with Otto Preminger, who directed “Carmen Jones,” in the film “Porgy and Bess.”

According to Biography.com, “He was verbally abusive and mishandled her money.  She lost much of her savings to bad investments, including Denison’s restaurant, which failed in 1962.  He left her soon after.”

Struggling with another failed marriage and diminishing career opportunities, Dandridge began struggling with addictions to alcohol and anti-depressants.

She died of an overdose of anti-depressants in September 1965.  Dandridge was 40-years-old.

Although Dandridge is sometimes forgotten, she did get the Hollywood treatment thanks to Halle Berry in the film “Introducing Dorothy Dandridge.”

Thankfully, that film gave her the shine that she deserved decades earlier.