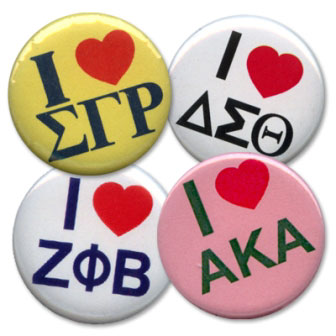 Men, remember when you first went to college and fell in love…with a group of women?

Did they dress in pink and green and flip their hair, or maybe they wore crimson and cream and dominated the step shows?

No, I know you loved the ones in the blue and white because they were the most laid back girls on campus, or maybe they wore the blue and gold and were the sweetest women you’d ever met?

Which group of sorority women did you fall head over heels for, and still love more than ever; AKAs, Deltas, Zetas or S G Rhos?

Tell the truth, to this day you still are secretly in love with one of these groups of sorority women, and you will always try and catch one and give it the ole college try!

“The most special thing about a sorority woman is their understanding of Greek life both internally and externally,” says Sam who is a member of Alpha Phi Alpha. “Sorority women are also special because the bond you have is very unique, especially if a man doesn’t have sisters. It’s cool to have a group of women who can truthfully tell you everything you need to know about women.”

Now that we know how fraternity men view sorority women, I wanted to know which group of sorority women did men feel represented the ideal Black woman for them?

Sam continues, “My ideal type of woman would be an AKA. The reason I’m so attracted to AKAs is because I grew up around them. Most of the women at my hometown church are AKAs.

“They were always so loving, supporting, and generous and always looked out for everybody’s best interest. All of the AKAs I know are career-oriented, family-oriented and believers in the Word of God. They are intelligent, most academically inclined, beautiful, and know how to enjoy life. So with that being said, what more could a ‘brotha’ ask for?”

Sorority women are always stereotyped, and it seems that is the reason a lot of men approach them. It’s also because of these stereotypes men are already in love with them before they really get to know them. What are the stereotypes about these four sororities according to our men that makes them love’em or leave’em?

“Sigma Gamma Rhos are meek in that they are overwhelmingly social but functionally. Work ethics and intellect are assets that would serve any suitor well who wishes to be balanced,” says Valorian.

“Members of Delta Sigma Theta are well respected and excellent in initiating projects that are beneficial both in business and community,” says Sebastan.  “If you’re looking for a comparable partner she may be your best choice. That’s why I married a diva of DST!”

“To me, Zetas, mostly dated Sigmas, and I’m a Kappa,” says Joe. “I don’t know much about them and never dated a Zeta.”

“AKAs understand the importance of community and the subtle benefits of serving as a supporter of a greater vision,” continues Valorian. “They also appreciate the value of presentation.”

“Sorority women have a lot of stereotypes, but I have noticed that Sigma Gamma Rhos are the sweet girls and mostly turned out to be teachers,” says Cameron.

“I prefer to date Deltas,” Joe continues. “However I don’t think that all AKAs are the same and all Deltas are the same. I was with a Delta for many years and even after we broke up, she’s still as cool and down to earth as ever, and she is about her business and extremely successful.

“I went out with an AKA and she was too uppity. She lived out every bad stereotype of an AKA; she was high maintenance, and a tad self-centered, not my cup of tea.”

“When I was in college and in my early twenties I did prefer AKAs, based on a narrow perception of what a woman from that organization meant to me and to society,” replies Leroy. “Based on stereotypes, an AKA represented Victorian and Puritan values of what it means to be a woman.

“An AKA was caricatured as dainty, pretty, smart, long hair, and cultured. This stereotype is something that attracted me and many people because my identity as an African American male had not been self-formed yet. My identity and wants were based on media perceptions of what beauty was and what I needed to feel like as a person, an American person.

“As I have matured and come into knowledge of self, I no longer have preferences based on a group affiliation or stereotype. I am a sucker for a pretty woman with a big booty, but they come in many forms. During this time in my life I have mostly dated Deltas, but not intentionally.”

Any sorority woman may be intelligent, sexy, pretty, and business minded. This is probably why a lot of men like dating sorority women.

Whichever one you are secretly addicted to you really can’t lose.

But a word of advice, if you really like a lady and her sorority is last on your list, still try and give her fair chance, she just may surprise you!