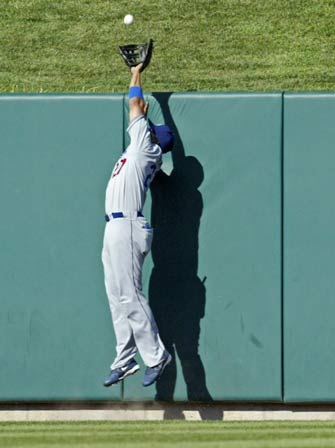 “The Bison” Hits His Stride as MLB Playoffs Loom

Nicknamed “The Bison” because of his long strides, great strength, and animal-like intensity, Matt Kemp, 25, of the Los Angeles Dodgers is an African American baseball star who seems ready to make his mark on the national stage in October.

The 6-2, 230 pound Kemp will be responsible for anchoring the Dodger outfield during what the team hopes will be a deep run in the playoffs. The Dodgers have had the best record in the National League for most of the season.

Matt Kemp plays centerfield between Manny Ramirez, a great hitter who is a liability in the outfield, and Andre Ethier, who had one of the great clutch seasons of all time at the plate this year but also led National League outfielders with seven errors. Primary outfield backup Juan Pierre has one of the weakest outfield arms in all of baseball.

Matt Kemp is also an anchor at the plate. In his second full season he maintained a batting average over .300 for most of the year and will finish with at least 26 homeruns, 34 stolen bases and 100 RBI. “Matt Kemp has extraordinary ability,” Dodger manager Joe Torre told ESPN the Magazine. “You can’t take your eyes off him. If you do, you’ll miss something.”

It hasn’t been all seashells and balloons for Matt Kemp since he arrived in the major leagues by hitting five homeruns in his first two weeks in 2006. Shortly thereafter, he slumped as big league pitchers probed for weaknesses and Kemp was slow to adjust. This led to return trips to the minor leagues in 2006 and 2007, before Kemp was able to harness his ability and deliver a .290 average with 18 homers last year.

Towards the end of the 2007 season and about two months after Matt Kemp’s final promotion to the big leagues, veteran All Star second baseman Jeff Kent was critical of his young Dodger teammates, saying they didn’t play the game with the proper reverence or respect.

Kent said there was a schism between older and younger players, one group trying to win an elusive championship and the other trying to make their mark and survive in the big leagues. “A lot of kids in here, they don’t understand that,” Kent told the Los Angeles Times. “You hate to waste an opportunity, even if it’s one and even if it’s your first time. It’s hard to get them to understand that because they haven’t been there. So there lies some frustration.”

Matt Kemp was singled out for base-running mistakes and for failing to defer to veterans in the clubhouse. Kemp told ESPN that his actions at that time were misconstrued; that he may have been rash, overeager and bullheaded, but never disrespectful. “I’m a good dude,” he said.

As this season winds down all that is firmly in the past. Now that his on-field performance is established, Kemp has accepted veteran third baseman Casey Blake as a mentor and has emerged as a leader within the young cadre of Dodgers that includes Ethier, catcher Russell Martin and first baseman James Loney. Blake told ESPN that he’s there to pump Kemp up when he needs it and to keep him grounded when perhaps he’s flying a bit too high.

Dodger hitting coach Don Mattingly also has a great deal of faith in Kemp. “Matt Kemp doesn’t shrink from the moment,” said the former American League batting champion and MVP. “There’s a toughness about him. He’s not afraid—at all.”

With Kemp, Loney, second baseman Orlando Hudson and relief pitcher James McDonald, the Dodgers have one of the largest African American cores among playoff teams, especially if you add the Canadian catcher Martin who is also of African descent. This is a team that Regal Magazine will be watching closely as baseball’s postseason unfolds.