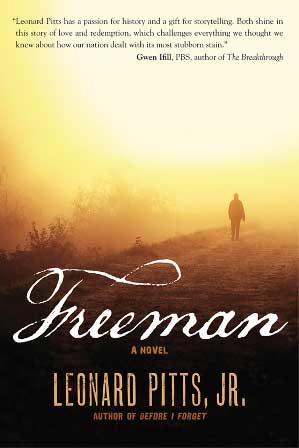 In Leonard Pitts, Jr.’s new novel Freeman, the Miami Herald Pulitzer Prize-winning columnist gives readers a great look at a period in the United States that not too many know much about – the hours and days after the Confederacy’s surrender in the Civil War, the assassination of President Abraham Lincoln, and the immediate impact each had on the entire nation.

Leonard Pitts’ novel Freeman is about a forgotten era in American history and Leonard Pitts sheds some great light on this remarkable time.

It’s about former slaves, who are not only determined to assimilate into a newly freed American society, but to also find and reconnect with family members separated by ownership during one of the nation’s most horrible atrocities against a race of people.

After being told that the Confederates had surrendered and slaves in the now devastated South are free, Sam Freeman sets out on what could be called an insane quest to find his wife Tilda.

He starts his trek from the slave-free north in Philadelphia to the now devastated and bitter South to Mississippi. A place where there is still a grudge that some say still lasts today from being defeated by the Union Army in the Civil War.

Sam Freeman hasn’t seen Tilda for 15 years after he is sold to new slave owners shortly after the death of their son Luke, something that has haunted Sam ever since. But Sam, now a “free man” is determined to find Tilda and make things right between them.

Tilda is a woman who has been physically and mentally tortured, broken, and living in fear due to a lifetime of slavery and heartache.

Tilda has to endure ornery slave owners who, as many other Whites and slave owners in the South were not taking the defeat by the North very well.

And after 15 years, she still harbors the hurt she suffered from the death of her son and from Sam’s actions. The concept of actual freedom is very foreign to Tilda and she can’t see herself breaking free from the less than congenial slave master Marse Jim McFarland.

McFarland is a former soldier who fought for the South, but went AWOL to care for his dying son. That is just one more reason for him to be bitter after losing the war and never conceding the fact that his slaves were no longer his.

Some escaped him to freedom with tragic results, but a fearful Tilda is forced to stay with McFarland, who leaves for Arkansas with the hopes of reestablishing himself as a prideful slave owner.

Sam, Tilda and thousands of other Negros and an entire nation try to adjust to life in the post Civil War era as well as the sudden assassination of President Abraham Lincoln. The South has just been handed a staggering defeat and now must come to terms that the very people who they enslaved for so many years were now free and seen to be their equals.

As many Whites like McFarland dared not accept the concept of freed slaves, there were just as many who embraced the idea, and were out to try to correct some of the wrongs that had been laid upon Blacks.

Prudence Cafferty Kent was one of them. Kent is an idealistic 20-something, sort of debutante from Boston who is out to carry the work of her late father, a wealthy plantation owner and her husband, who died in the war.

Kent is accompanied by Bonnie, a Black servant who is treated more like a member of the Cafferty family and is like a sister to Kent. She is a no-nonsense woman who is not afraid to stand up to Kent and is pessimistic about Kent’s dreams and the dangers they face.

The two travel together to Buford, Miss. where Kent wants to continue the dream that her abolitionist father had, which is to open schools to educate freed slaves on becoming accustomed to life being free, productive members of society.

She and Bonnie are in for a big surprise when they run into a group of Blacks and Whites on their travels in Memphis, Tenn. that would change their lives forever. On top of that, let’s just say that the folks in Buford don’t take too kindly to a White woman from the North coming into their territory to open a school to educate the people they once owned or refused to surrender ownership to.

Leonard Pitts’ character Sam is great and is someone who is smart, astute, well-read (which was frowned upon at that time), and in spite of his faults, Sam is a man who will not take no for an answer when it comes to making up for a terrible mistake he made in his past.

His determination knows no bounds as he gives up all the luxuries of being free in the North to follow his heart and try to make things better by getting the ultimate prize – his beloved wife.

One of my favorite parts comes early in Leonard Pitts’ book and to me sort of says it all as far as some of the great contradictions in the early foundations of this country.

Sam comes across a bunch of White men debating the Constitution and Declaration of Independence and finds, “himself wondering, as he often did when he contemplated this view, how they could have sat there, powdered and bewigged, debating the rights of man, yet never see the hypocrisy and irony of returning home to be tended by slaves.

“They had even written slavery into the great document for fear of offending delegates from the South. But the reckoning had come and now the country lay in smoldering pieces, and he had no idea if, or how, it could ever knit itself together again.”

Leonard Pitts’ novel also shows when people set their mind on a goal; nothing will get in their way of achieving it.

With all of its tragedies, Leonard Pitts’ characters never seem to give up and when they want to, there is usually someone there to lift them up, whether it be a fellow traveler or a sister and even others who would like nothing more than to escape the evils of slavery and be truly free.

Leonard Pitts’ novel Freeman is one of those books where the overall story is very enjoyable to read and the characters are great. It’s fiction, but very historical. The stories are as much tragic as they are heartwarming.

It is a little long and drawn out at times, but is inspiring as well as heartbreaking. Writer Leonard Pitts offers a great history lesson on some of the events that occurred just after the South was handed its head on a platter after the Civil War.