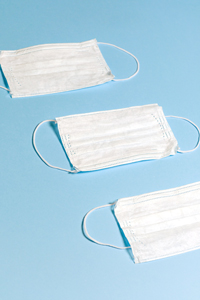 Many cities and counties now require people to wear masks in public due to the coronavirus pandemic.

Trae tha Truth Continues to Come Through For The H

When it comes to charity, community service and philanthropy, Houston rapper Trae tha Truth is definitely the truth.

The rapper born Frazier Thompson III has served the community during catastrophic hurricanes.

Therefore, very few Houstonians probably found it surprising to see him giving out masks throughout the city because giving back is what he is known for.

In fact, Trae tha Truth gave away thousands of masks in the Greater Houston area on May 13, beginning in the Alief area before making his way to Third Ward.

He handed out masks to anyone who needed them.

Over the past month, Trae tha Truth has helped distribute approximately 20,000 masks to Houstonians, jails and hospitals.

The giveaway was in partnership with rapper Jay-Z’s Roc Nation.

In April, Trae tha Truth teamed up with his business partners Bumpboxx, a Bluetooth company headquartered in Stockton, Calif., to give away 4,000 masks to Methodist Hospital in Houston and Harris County (Texas) Jail.

“We purchased the masks from an overseas company and paid for them ourselves,” said Trae the Truth.

“I was spending my own money but there was only so much I could do,” said Trae tha Truth. “I wanted to keep going so I started taking donations from people on an app called ‘$iamtraeabn.’ I can’t afford to pay for their rent but I can help with school supplies and groceries. I can donate $50 to $100 to each family.”

Along with his colleague Justin “DJ Rogers” Rogers, the rapper also runs Relief Gang, which was formed to help people suffering after Hurricane Harvey hit the Greater Houston area in 2017.

The rapper personally showed up in his boat to help residents stranded because of the floodwater including NBA star, Jonathan Simmons.

Trae tha Truth said, “Anytime something happens, I am going to be here to help. I’ve always felt like it’s what I was meant to do in life.”

In December 2019, the Relief Gang gave out 50 Christmas trees for families in need.

Trae tha Truth and Relief Gang gave out those trees on a first-come, first-serve basis.

In January, Trae tha Truth was back at it again, helping people adversely affected by the Watson Grinding explosion in Houston.

The explosion damaged the homes of many nearby residents.

Maria Hernandez, a mother of two children, had her roof collapse as a result of the explosion.

She had cracks in her drywall in a bedroom, and she also noticed some foundation damage to her home.

To make matters worse, Hernandez has a son on dialysis, had no insurance and no clear plan forward.

“I love proving to people that you’re not alone,” said the rapper. “In so many situations people feel like ‘if it ain’t my business and it’s not affecting me directly, then I’m good.’

“That’s not the case. It’s a lot of people who use those extra hands.”

He was also moved to help the victim of a carjacking.

Sheila Henry, a Houston area grandmother became the victim of a carjacking in October 2019.

Her ordeal touched the rapper who started a GoFundMe campaign to help Henry repair her damaged truck.

“When I saw it, I felt two things: anger and hurt,” the rapper said. “I couldn’t help but think, ‘What if this had been my mom or grandmother?”

However, he did not stop at just crowdsourcing.

He began visiting Henry to check on her after her ordeal.

The Houston-based hip-hop artist also gave her other resources to help her get through the trying time.

Furthermore, he hosted a physical fundraising event to add to the money raised by crowd funding.

Henry told the Houston Chronicle, “There aren’t many people that will come to your rescue. He didn’t have to do it. I think he is fantastic.”

However, Trae tha Truth is not the only emcee from Houston helping out his community and city during the novel coronavirus pandemic.

Rapper Slim Thug has also stepped up to help fight the deadly outbreak.

The COVID-19 pandemic hit especially hard for Slim Thug because he became one of the first celebrities to contract the coronavirus.

Slim Thug, born Stayve Thomas, teamed up with cigarette smoke-eliminating fragrance company Smoke Shield to donate 1,000 bottles of hand sanitizer to the Houston Police Department and Metro city bus drivers last month, and planned to give an additional 1,000 bottles of sanitizers later in April as well.

“I want our police officers and bus drivers to know that we appreciate their service during this tough time,” said Slim Thug. “They’ve always been a huge part of keeping Houston going.”

Slim Thug tested positive for the coronavirus in March.

In April, his publicist La’Torria Lemon said, “He is doing much better…”

And many in Houston are doing much better during this pandemic, and even before the pandemic, because of the efforts of rap stars and philanthropists like Slim Thug and Trae tha Truth.