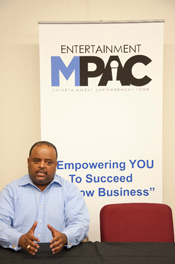 Journalist Roland Martin is one of the most respected Black voices in mainstream media (Photo Credit: Tim Wells/Regal Media Group).


End of an Era

On Wednesday, PageSix.com reported that the informative and popular television news show “News One Now” hosted by veteran journalist Roland Martin would go off the air after the Dec. 21 episode.

TV One reported that the cancellation is due to budget cuts.

“They called a meeting on Wednesday and told the staff they were canceling the show.  They’re having significant financial problems and they have to scale back,” a source said.

TV One’s interim GM, Michelle Rice stated in a memo, “After four years of award-winning programming and distinguished service to our viewers as the only Black daily newscast on television, the network has made the difficult decision to suspend production of ‘News One Now’ as a daily morning news show.  The last live show is scheduled [Dec. 21].”

While financial struggles are the downfall of many television shows, Martin’s fans and colleagues have called for a boycott of TV One because of the controversial decision.

Fans loved the fact that for four years, Martin reported news about the Black community from an unapologetically Black perspective.

And many are perplexed that the show got canceled after recently being expanded from a one-hour show to a two-hour show.

Without “News One Now,” many in the Black community feel that issues that concern them will once again be muted.

In the memo, Rice continued, “While we will continue our long-standing partnership with Roland Martin to ensure his important voice can be heard across all Urban One platforms examining the issues of importance to the Black community, we regret this decision adversely affects several of our valued colleagues whose positions will be eliminated with the suspension of the show.”

On Wednesday, Martin took to social media to thank TV One, founder Cathy Hughes and CEO Alfred Liggins for the platform to discus issues affecting the Black community.

Martin tweeted, “Fam, the sad news is true.  The staff of @tvonetv #NewsOneNow was informed this afternoon that after four years of doing groundbreaking and award-winning work, the show will cease production at the end of the year.  Our last show will be Dec. 21. #BringTheFunk.”

The Houston native also stated that there were many tears when he informed his crew of the news.

Martin said that even many of his White crew members were in tears because working on the show gave them the opportunity to learn more about the Black community and its concerns.

Nevertheless, those who know Martin well know that it is only a matter of time until he rebounds and continues to bring the funk, as he likes to say, when speaking up for the concerns of Black America.

According to TheSource.com, “Martin, who was also a former contributor to CNN, first started with TV One in 2009 with the Sunday news show, ‘Washington Watch,’ which ran for (four) years.”