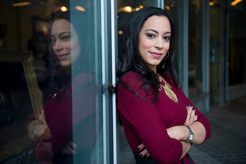 On the presidential campaign trail, then candidate Donald Trump made some controversial remarks about women from calling them nasty women to talking about blood coming from certain parts of their anatomy.

Furthermore, the future President Trump faced additional criticism for admitting to sexually groping women in the past.

Despite his power and influence and the power of those around him, Trump has made some stars of multiple women his administration might have wanted to silence.

In the process, the Trump administration’s treatment of some Black women has encouraged other successful Black women to speak out on the problems they face in a predominantly White male work environment.

As a result, RegalMag.com would like to honor three women who continue to be a voice for underrepresented communities.

Rep. Maxine Waters (D-Calif.)—United States Congresswoman Maxine Waters needs no introduction.  In Washington, D.C. and California, Waters has earned the reputation as being one of the most powerful women in politics for her work helping women, minorities and the poor.  She is currently in her 13th term representing South Central Los Angeles.  The politician serves as the Ranking Member of the House Committee on Financial Services.  Waters also serves on the Steering & Policy Committee, Congressional Progressive Caucus and the Congressional Black Caucus, according to House.gov.

Political commentator Angela Rye—Angela Rye is a political commentator for CNN and NPR.  She is an attorney with a J.D. from Seattle University and CEO of Impact Strategies, a political advocacy firm located in Washington, D.C.  Rye runs the boards of the Congressional Black Caucus Institute, Congressional Black Caucus Political Action Committee and Women in Entertainment Empowerment Network.

Journalist April Ryan—Veteran journalist April Ryan currently serves as White House Correspondent for the American Urban Radio Network.  Ryan is also the acclaimed author of “The Presidency in Black and White: My Up-Close View of Three Presidents and Race in America.”  She is a proud graduate of a HBCU (Historically Black Colleges and Universities), Morgan State University and also a member of Delta Sigma Theta Sorority, Inc.  Her work has also appeared in Politico.