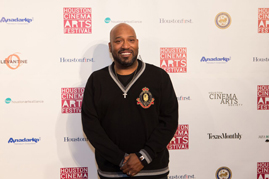 Rap icon Bun B will make a couple of appearances at the Houston Cinema Arts Festival in November (Photo courtesy of On The Mark Communications).

Festival Back and Bigger Than Ever

Back again and better than ever, the 2017 Houston Cinema Arts Festival (HCAF17) will take place at various locations throughout the city from Nov. 9-13.

The festival kicks off Thursday night, Nov. 9 with the screening of “Love Cecil” which is “about iconic British photographer, costume designer, and larger-than-life personality Cecil Beaton, who won two Academy Awards for his work on ‘Gigi’ and ‘My Fair Lady.’”

Texas rap legend Bun B will make an appearance at the “Bodied” screening, which is a satire on the competitive sport of battle rap.  The Port Arthur, Texas native and former member of the legendary rap group UGK (with the late Pimp C) will also perform at “Singin’ in the Rain: A Houston and Cinema Arts Celebration” at White Oak Music Hall (WOMH) on Nov. 11.

According to the official press release, “The musical numbers will be unique renditions of songs from the iconic Gene Kelly film, which celebrates its 65th anniversary in 2017, and will be accompanied by energetic dance routines.  As a part of the evening, WOMH will donate 10% of box office proceeds to its Hurricane Harvey Relief Fund and additionally donate the venue to the Houston Cinema Arts Society for the program.”

The Houston flavor continues with films on Houston based artists.

The film “Jesse Lott: Artist in Action” will be about the Fifth Ward artist Jesse Lott who recently won the 2016 Lifetime Achievement Award by the Art League of Houston.

And according to the official HCAF17 press release, “Filmmaker Wayne Slaten, whose short film ‘Red Pearl’ was a prize winner at CineSpace in 2015, will premiere ‘Ash: The Art of Wayne Gilbert’ about the eponymous artist who utilizes cremated human remains to create stunning artistic works.”

The Tonya Harding biopic “I, Tonya,” which stars Margot Robbie as the controversial figure skater will close out HCAF17.

Harding infamously had her goons injure fellow American figure skater and rival Nancy Kerrigan leading up to the 1994 Winter Olympics.

Furthermore, Houston directors will get their moment in the spotlight at the Houston Cinema Arts Festival.

The press release states, “Among the directors raised in Houston returning to show new works in this year’s festival are Bradford Thomason with ‘A Life of Waves’ and Blake Williams with ‘Prototype.’  Also returning is Sam Wainwright Douglas whose film ‘Honky Tonk Heaven: Legend of the Broken Spoke’ served as the opening night film at last year’s festival.  Douglas will present his film ‘Through the Repellent Fence,’ which follows Native American art collective Postcommodity as it strives to construct Repellent Fence, a two-mile long outdoor artwork that straddles the U.S.-Mexico border.”