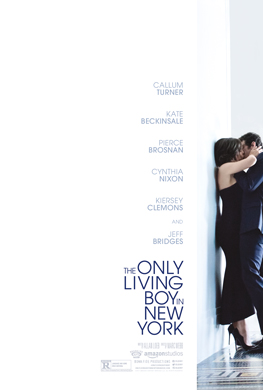 In the movie “The Only Living Boy in New York,” Thomas (Callum Turner, “Assassin’s Creed”) aspires to be a successful author.

As a child, when he presented his essays to his publisher father Ethan (Pierce Brosnan, “The November Man”), his dad did not seem impressed to say the least.

Ethan referred to Thomas’ writings as serviceable but not overly impressive.

The same description applies to “The Only Living Boy in New York.”

While the movie is O.K. with an intriguing plotline and clever dialogue, it only rises to the level of serviceable, which can translate into average, ordinary or decent.

In “The Only Living Boy in New York,” Thomas is an awkward young man with a love of books and love for a woman who is already taken.

The only person that truly gets Thomas is his love interest Mimi (Kiersey Clemons).

And although Mimi and Thomas enjoyed a magical one-night stand on Aug. 8, Mimi is not as interested in a relationship as Thomas is.

Mimi is crazy about Thomas, but she is in a long distance relationship with her rocker boyfriend.

When Mimi tells Thomas that she is not interested in a relationship it devastates Thomas.

However, that devastation leads to a mentor/mentee relationship with his new neighbor W.F. Gerald (Jeff Bridges).

Although Thomas has just met W.F., he finds it easier to talk to him than to talk to his own father who is not impressed with his choices in life or his lack of career direction.

Thomas’ relationship with his father is like a more intense version of the father-son relationship between Jackson (Morris Chestnut) and Fred (Clifton Powell) in the 2001 film “The Brothers.”

However, when W.F.’s advice ultimately leads to an affair with the much older Johanna (Kate Beckinsale), the affair could ruin his friendship with Mimi and his relationship with his parents.

Actually, Thomas’ actions have the potential of totally ripping the family apart if he is not careful.

Screenwriter Allan Loeb does a clever job with the script of “The Only Living Boy in New York.”

Loeb takes an explosive plotline and combines it with witty dialogue like Mimi saying that New York has lost some of its soul over the years and that Philadelphia is the worst neighborhood in the “Big Apple.”

“The Only Living Boy in New York” features appearances from some of the most recognizable faces in the game like Debi Mazar (“Jungle Fever”) and Tate Donovan (“The O.C.”) along with Cynthia Nixon (“Sex and the City”) who plays Thomas’ mother Judith.

However, “The Only Living Boy in New York” got off to a boring start, unfortunately, and the intensity of the rest of the film cannot make up for the lackluster start.

But fortunately for Thomas, he finds out that his writings might be more than just serviceable and that might make up for the lack of direction in life he has shown.

Unfortunately it does not make the movie “The Only Living Boy in New York” more than just serviceable.