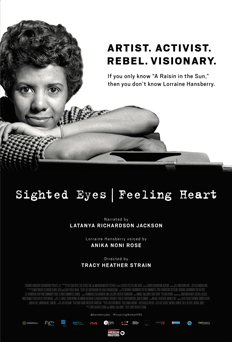 Many people know a lot about Lorraine Hansberry’s classic play and its film adaptations, “A Raisin in the Sun.”

However, fewer probably know about the esteemed playwright herself.

That sad reality will hopefully change because of the feature length biographical documentary, “Sighted Eyes/Feeling Heart.”

According to information about the documentary, “Award-winning filmmaker Tracy Heather Strain explores the life and work of this passionate writer and civil rights advocate, who played a significant role in the major cultural and political movements of her time.

“Narrated by award-winning actress LaTanya Richardson Jackson and featuring the voice of Tony Award-winning actress Anika Noni Rose as Lorraine Hansberry, ‘Sighted Eyes/Feeling Heart’ is filled with insightful on-camera interviews with those who knew her best, and rare archival material, creating a nuanced portrait of an activist and artist whose words and ideas are as relevant today as they were when she first wrote them.”

The Houston screening will take place Friday, Dec. 15 at 7 p.m. at the Houston Museum of African American Culture.