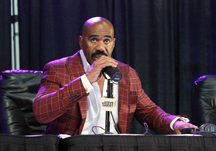 George Clinton should thank Omega Psi Phi Fraternity for making “Atomic Dog” a timeless classic that will never go out of style.

However, Omega Psi Phi Fraternity is much more than a theme song.

Their motto is “friendship is essential to the soul” and never is that motto on display more than in the media business as brothers continue to help brothers scale the heights of success in Hollywood.

While the “good bruhs” can boast of luminaries like Michael Jordan and Jesse Jackson, in the 21st century their mark on Black media is undeniable.

Therefore, RegalMag.com is proud to profile the accomplishments of 10 “Ques” in our five-part series on members of the media who also happen to be members of a predominately Black Greek Letter Organization (Omega Psi Phi Fraternity, Inc.).

Click the links for more information on each “Que-Dawg.”

Joe Torry—“Damn, is he funny?”  Joe Torry was absolutely funny as the host of HBO’s “Def Comedy Jam.”  Despite his successful career, we’re still mad at him because of the way Chicago punched Iesha (Regina King) in “Poetic Justice.”  Just kidding, we know he was just doing his job and did it well in roles in other films like “Tales from the Hood” and “Sprung.”

Doug Stewart—There was a time when the “Two Live Stews” (the Stewart Brothers, Doug and Ryan) were everywhere from radio to print to television.  Their radio show was syndicated nationally at one point and they made national appearances on ESPN regularly.  After the radio and ESPN gigs dried up, Doug did commentary on HLN and launched “The Doug Stewart Show” online.  "The Stews" now appear on Saturdays on WGST.

Ryan Stewart—Unlike many successful sibling groups, Doug and Ryan Stewart contributed equally to their enormous success during their heyday.  And they made a point to rep Omega Psi Phi Fraternity whenever they got the opportunity.  After their ESPN and Sporting News radio contracts ended, Ryan had a gig four nights a week talking SEC football on CSS.  "The Stews" now appear on Saturdays on WGST.

Rushion McDonald—You may not know the name of this Omega Psi Phi Fraternity member, but you most certainly know his work.  Rushion McDonald is the executive producer behind the Steve Harvey film, television and radio empire.  He is the co-creator of the Neighborhood Awards and an award-winning baker.  The former comedian teamed up with Perfect Bake to create a recipe app and possibly a cookbook in the future.

Terrence J—This member of Omega Psi Phi Fraternity seemed to have greatness written all over him since his days as Student Government Association President at North Carolina A&T University.  After winning the coveted job as co-host of BET’s “106 and Park,” Terrence Jenkins has parlayed his time in front of the camera into a successful film and television career.  He recently starred in “The Perfect Match” while continuing to appear on the small screen in shows like “Coupled.”

Stephen A. Smith—This honorary member of Omega Psi Phi Fraternity might just be the top dawg in sports journalism.  Whether you love him or hate him, his show “First Take” on ESPN with Skip Bayless is must-see television.  The former basketball player for Winston-Salem State University has also worked for the Philadelphia Inquirer, Mad Dog Radio and New York Daily News.

Shaquille O’Neal—While few would focus on Shaq’s career in media as opposed to basketball, he is definitely a media personality.  He has several films on his resume like “Blue Chips,” appears in countless commercials, “NBA on TNT” and produces many specials for talented comedians.

Tom Joyner—This Omega Psi Phi Fraternity member and proud Tuskegee University alum is the man responsible for the success of “The Steve Harvey Morning Show,” “The Breakfast Club” and “The Ed Lover Show.”  He set the standard for Black men as nationally syndicated radio hosts.  He has expanded his brand to include BlackAmericaWeb.com, The Tom Joyner Family Reunion and the Fantastic Voyage, all while faithfully supporting the Black community and Black colleges.

Steve Harvey—While his frat brother started the nationally syndicated radio phenomenon in the Black community, Steve Harvey is taking it to the next level.  The only question is when does this brother sleep?  He continues to host his radio show “The Steve Harvey Morning Show,” the “Steve Harvey” TV talk show, “Family Feud,” “Celebrity Family Feud,” “Steve Harvey’s Big Shots” while also hosting the Neighborhood Awards and most infamously the Miss Universe Pageant.