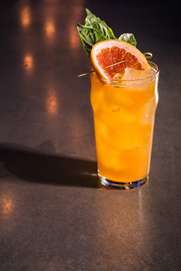 The Lucky Luciano is one of the most popular drinks at The Still in Vegas (Photo courtesy of Fingerprint Communications).

Are you ready for some football?

The answer is no if you’re not watching it in Las Vegas.

Sporting events are great on their own, but if you haven’t experienced the atmosphere in Las Vegas during the fall, you have not lived yet.

And of all the sports bars in Las Vegas to catch the action, The Still is still the ultimate venue to enjoy the action of football season.

So what separates The Still from the Vegas competition?

“Our televisions,” said Josh Lang, Managing Partner of The Still at the Mirage Hotel and Casino in Las Vegas.  “We have 37 65-inch TV’s strategically placed in our venue in a way that makes watching a game for three hours at The Still feel like you are doing so from home.”

In addition to the big screen televisions, The Still has a separate “man cave,” an airstream trailer that food is served out of and over 50 selections of beers and craft cocktails.

At the center bar, patrons can choose from 50 beers with the most popular being the Stiegl Radler Grapefruit because of its unique taste.

Regular customers at The Still will notice a small breakfast menu now since the sports bar will open at 9 A.M. for football games every Saturday and Sunday.

And unlike many local sports bars across the country, The Still has its own world-renowned chef, Brian Massie, giving the bar its own signature taste.

“We are lucky to have a chef like Brian,” said Lang.  “His style and creativity allow us to set ourselves apart from most sports bars.  Two of his most popular dishes would be our Crispy Chicken Wings (Buffalo or Spicy Korean) and our Mini Cheese Burgers, which come with the best French Fries I have ever eaten.”

The popular “man cave” allows a small group to watch the games privately with their closest friends.

“We created a space that has four 65-inch televisions, seating for 15 that includes a couch and cigar arm chair, and the ability to adjust the channels and volume inside your room with our custom remote control tablet.”

With Las Vegas being a sports capital of the world, fans from across the globe visit The Still annually.

Of all of the rowdy football fans in the world, Lang said the rowdiest have to be the Ohio State Buckeyes fans and the Seattle Seahawks fans.

However, that dynamic might change if the Oakland Raiders become the Las Vegas Raiders in the near future.

If the Raiders relocate to Las Vegas, Lang said it would increase traffic to the city whenever the team has a home game, giving the city around 20,000 visitors from the opposing city.

Furthermore, having the Raiders in town would allow the sports bar to do countless promotions with team during the weeks of home games.

That increased traffic would definitely make it more difficult to get into The Still.

Lang said the best way to ensure a spot at The Still is to make a reservation by calling 702-692-8455 or by emailing the VIP Services team at Reservations@thestillvegas.com.

Visitors will find excitement even outside of football games, particular for UFC events.

The Still employs beautiful women, not just for eye candy, but women who are also extremely knowledgeable about sports, which separates it from the competition.

However, for those who just cannot get into The Still during their trip to Las Vegas, Lang recommends Clique Bar & Lounge located inside The Cosmopolitan.

Also, off the strip Hearthstone and Borracha will host their own viewing parties with food and drink specials.

And for those who cannot make it to Las Vegas this season, The Still has some great recipes that will give sports fans The Still experience in their hometowns.