Movie Review: ‘The Girl on the Train’ Shows Both Genders ‘Cray Cray’ 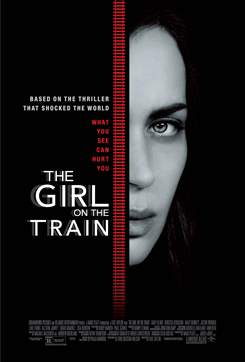 Men like to say that all women are “cray cray” (aka crazy) and movies like “Gone Girl” proved them correct.

However, if one talks to women some will say men are just as “cray cray.”

Now, women have the movie to prove that men can be just as “cray cray” in the form of “The Girl on the Train,” a film filled with only crazy people.

In “The Girl on the Train,” Rachel (Emily Blunt) had the American dream on the surface.

She had a successful husband and a beautiful home in the suburbs of New York City.

The loving wife has a talent that most do not posses.

But she also has her inner demons.

She could not conceive a child for her husband Tom (Justin Theroux).  Not even in vitro fertilization could help Rachel get pregnant.

Furthermore, she has a severe alcohol problem, which gets so bad that she cannot even remember her behavior when she wakes up from her intoxication.

Tom, however, would fill her in on her abusive and destructive behavior, which caused him to lose his job and pushed him into the arms of another woman, Anna.

Anna (Rebecca Ferguson) is where Rachel is supposed to be.

She has moved into Rachel’s house with Tom.

Tom’s new wife has given him the child that Rachel could not conceive.

And Rachel is on a downward spiral towards depression and self-destruction.

Rachel spends her entire days riding on the train past her old home on Beckett Road.

The girl on the train is obsessed with Tom and his new wife.

But she is more obsessed with their neighbor Megan (Haley Bennett) and her husband, Scott (Luke Evans).

In them, Rachel sees the perfect couple.

She sees what should have been her life, which deepens her downward spiral into depression.

However, when Rachel sees someone from the perfect couple messing up their blessing she confronts them.

Unfortunately, when that person she confronts comes up missing, Rachel becomes the prime suspect in that disappearance.

And because of Rachel’s blackouts from alcohol abuse, she does not know whether or not she committed the crime.

What ensues in “The Girl on the Train” is weird (in a good away), totally unexpected and shows that life is sometimes a mirage, and other people’s lives are not usually as good as they appear.

“The Girl on the Train” is the answer to “Gone Girl.”

However, the filmmakers tell the story in a slightly unique way, introducing each female character and her story individually with them narrating, then showing how their lives and stories intertwine with flashbacks.

The movie totally breaks down the Hollywood curse of being predictable.

Throughout the film it will be obvious to moviegoers who is guilty of the crime until moviegoers discover they were obviously wrong.

Unfortunately for “The Girl on the Train,” the train starts out slow and uneventful.

But the reality of what happens to one of the girls is heartbreaking and unpredictable, proving both genders have some crazy in them.