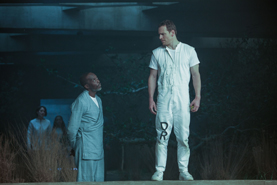 Save Your Money; Play Video Game Instead

The film industry has been trying to perfect the cross-platform video game genre, but with the release of this painfully below-average and empty action/sci-fi movie, they are going to have to keep practicing.

Aside from the blockbuster “Resident Evil” series, Hollywood has struck out when it comes to live-action video game films.

After the release of the sub-par “Warcraft” film earlier this year, all eyes focused on “Assassin’s Creed” to debunk the tradition of horribly mediocre video game movies.

Sorry to be the one to break it to you, but try not to get your hopes up.

There’s no doubt that fans of the video game series will love the film.

I have spent many hours killing pixelated Templars and jumping around Ubisoft’s virtual rendition of Spain.

Prior to watching the shameless money-grab, I had high hopes for an entertaining two hours of action.

To my dismay, the convoluted storyline left me scratching my head but satisfied with the plentifully intense fight scenes and parkour.

Kurzel reunited with his co-stars from “Macbeth,” Michael Fassbender and Marion Cotillard and rumor has it they plan on making assassin sequels.  The film also stars Michael K. Williams of “The Wire.”

Instead of being euthanized, the beautiful scientist Sofia Rikkin (Marion Cotillard) adopts Cal as her little test subject.

Lyncher is hooked up to a futuristic robotic arm capable of transcending time and space and boggling the minds of all viewers.

The entire film revolves around a century-long battle between the rebellious, underground ring of Assassins and the Templars.

The two are willing to fight to the death over a magical apple, referred to as the Apple of Eden, with the capacity of free will and potential to eliminate violence from the world completely.

The confusing storyline will keep audiences retracing their steps as they try to figure out which group has the mystical fruit.

It’s hard to recommend this film to anyone unless you are a devout lover of the Assassin’s Creed video games.

I consider myself a fan of virtually every game in the series, but telling someone to spend their money on this strange, mind-numbing excuse for a movie feels wrong.

My advice: skip the movie, play one of the games for a few hours instead. It will make more sense.