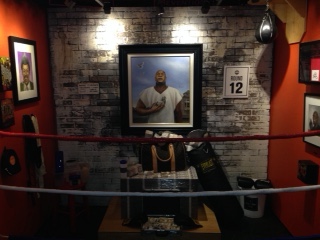 “Fight for Fight,” a piece by Dubelyoo, visual artist and co-producer of Art, Beats and Lyrics (Photo Credit: Regal Media Group/Todd A. Smith).

Who can remember when The Notorious B.I.G., rhymed, “Remember Rappin’ Duke, du-hah, du-hah, you never thought that hip-hop would take it this far” on his 1994 breakout hit “Juicy?”

The emcee from Brooklyn, N.Y. reminisced on the origins of hip-hop and how few back then thought the hip-hop dream would go hand-in-hand with the American dream.

The American dream is a fascinating phenomenon especially when people come from nowhere to somewhere inexplicably.

In the late 1970s, residents from The Bronx, N.Y. came together to form a culture, which included rappers, disc jockeys, break dancers (B-boys and B-girls) and graffiti artists, as a way to escape the gang culture that permeated the streets.

Now visual artists like Dwayne “Dubelyoo” Wright are in the limelight ‘cause they paint tight and thanks to corporate America, he is blowing up like the World Trade to paraphrase the late, great Biggie Smalls.

Thanks to Art, Beats and Lyrics, sponsored by Jack Daniel’s Tennessee Honey and Gentleman Jack, urban art and hip-hop are joining forces again for the 11th straight year.

“When hip-hop originally started, it wasn’t just like there were only rappers by themselves.  It was rappers, DJ’s, B-boys, graffiti artists.  They all hung out in the same circles.  And I think maybe we have to get back to that a little more.”

Thanks to Art, Beats and Lyrics, all the elements of hip-hop culture are reunited again.

Art, Beats and Lyrics, a traveling art and music tour, recently made a stop in Houston on Jan. 8 featuring a performance by rap star Twista and visual art by talents like Dubelyoo, Zach Murray and others.

As a college student, Dubelyoo only saw urban illustration in magazines like “The Source” or “XXL.”

“When I was in college ‘The Source’ Magazine was like the Bible,” Dubelyoo said.  “It was like the hip-hop Bible.”

His college professors did not even know what urban illustration was and tried to steer him away from that particular genre.

However, he would make an effort to take everything he learned in classes on composition and methods and use those techniques and combine it with his affinity for hip-hop.

Now, thanks to the global success of hip-hop and corporate clients, urban illustration is not just seen as a hip-hop subculture, but as a sought-after art form.

Dubelyoo’s visual art has been featured in publications like “Vibe” and “XXL.”

He even worked for clothing line FUBU for a brief time.

Dubelyoo served as the creative director for Art, Beats and Lyrics from 2008-2015.

He has also created murals for the Atlanta Hawks and Guinness.

Additionally, he has won numerous awards like the 2009 Atlanta Addy Awards and the 2009 Silver Communicator Award.

Coming up in the hip-chop community, Dubelyoo was inspired by artists like Andre LeRoy Davis.

Now, he is an inspiration for up-and-coming artists.

His former professors from East Carolina University probably could never have imagined urban illustration and hip-hop culture would have taken him this far.

And with the continued importance of hip-hop, the sky is the limit on how far he and the urban illustration genre can truly go.