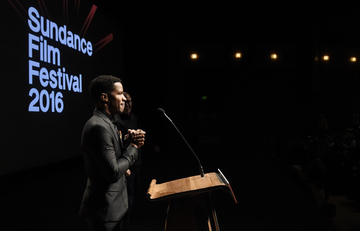 Nate Parker, the filmmaker and star of “The Birth of a Nation,” takes the stage at the Sundance Film Festival to introduce the film on Jan. 25 in Park City, Utah (Photo Credit: Chris Pizzello/Invision/AP).

First and foremost, congratulations to actor/filmmaker Nate Parker for scoring the biggest purchase in the history of the Sundance Film Festival for his upcoming film “The Birth of a Nation.”

Parker deserves even more praise for the subject matter of “The Birth of a Nation,” which is a biopic on slave revolt leader Nat Turner.

The film, which hits theaters Oct. 7, should put to rest any notion that Black slaves were content with their enslavement and did not fight back.

But before the film is put into the history books with slave revolt movies like “Amistad,” RegalMag.com believes that it is important that a little Turner history is shared before the release of the much-anticipated film.

Nat Turner was the mastermind behind the insurrection, which included between 60 and 80 slaves and killed 55 to 65 White Americans.

Turner was born on Oct. 2, 1800 to a slave named Nancy who reportedly tried to kill her son at birth so he would not endure the horrors of slavery.

During his childhood, Turner learned how to read and learned Christianity, later becoming a traveling preacher.

His travels as preacher allowed him to learn about the geography and the mindset of local African-Americans, which allowed him to plan the insurrection.

Turner had two sons and a daughter with his wife Cherry before the family was split up as the result of Samuel Turner’s death in 1822.

Nat Turner was subsequently sold to Thomas Moore while his wife and children were sold to Moore’s neighbor, Giles Reese.

During Turner’s revolt, all Whites were killed regardless of age and sex, except for those on the plantation where his wife and children were slaves, those on the farm of a childhood friend and a poor White family who could not afford slaves.

After the insurrection, Turner spent two months in hiding before being sentenced to death by hanging on Nov. 11, 1831.

Twice as many African-Americans died than White Americans as a result of the slave revolt.