Win Free Passes to Advance Screening of ‘Run All Night’ 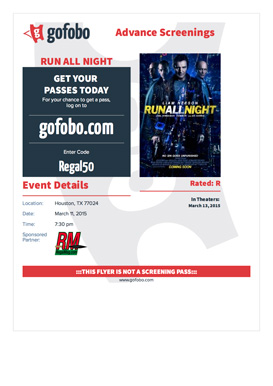 Who Can Be Trusted?

Hollywood often glamorizes mob life in film and television, but what glitters is not always gold.

The mob often views itself as a brotherhood or family.  Members never snitch on their “family” members and loyalty in all forms is key.

Nevertheless, it is often the ones closest to a mobster that are the most dangerous, and Jimmy Conlon (Liam Neeson) “has one night to figure out where his loyalties lie: with his estranged son Mike (Joel Kinnaman) whose life is in danger, or his longtime best friend, mob boss Shawn Maguire (Ed Harris), who wants Mike to pay for the death of his own son,” according to imdb.com.

Likewise, RegalMag.com readers in Houston have only one night to make an important decision as well.

They have to decide whether they want to see a free, advance screening of “Run All Night” Wednesday, March 11 at 7:30 p.m. at Edwards Marq’E on the Katy Freeway or wait to see it with the general public.  To download free passes click here and use the promo code Regal50.