The Best Rapper Ever From 10 Largest U.S. Cities 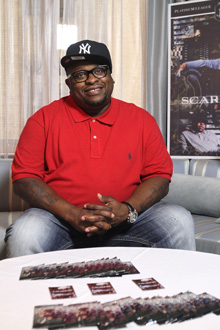 Without question, Scarface is the best rapper ever to come from the fourth largest city in America (Photo Credit: AP Photo/Donald Traill).

Rep Yo City: The Best Rapper Ever From 10 Largest U.S. Cities

An art form that started in the streets of The Bronx, N.Y. made its way to the West Coast, the Dirty South and all points in between.

Regardless of the different styles of rap popularized by various regions, lyricism knows no location, and many cities can make the argument that their city produced the best rapper ever.

From Jay-Z to Ice Cube, RegalMag.com lists the best rapper ever from the biggest U.S. cities and their surrounding communities.

New York City (Jay-Z)—A city that has produced some of the best rappers ever like Rakim, Nas, Method Man, Big Daddy Kane, KRS-One and The Notorious B.I.G. should not have to be reduced to one winner.  However, no rapper  (with the exception of Dr. Dre) has had a bigger impact on the music business as Jay-Z.  From hit albums, to record labels, to streaming music services and clubs, Jay-Z is “not a businessman; he’s a business man.”

Los Angeles (Ice Cube)—The West Coast has produced some of the best rappers ever from Snoop Dogg to Kendrick Lamar to The Game, but nobody combined the Cali swag with the social commentary made famous by East Coast artists such as Public Enemy like Ice Cube.  Starting out strictly as a “gangsta” rapper with N.W.A., as a solo artist Cube branched out to discuss political and social issues affecting the Black community.  Furthermore, he is such a big movie star that many youngsters do not even know he started out as one of the best rappers ever.  The only thing that would complete his career is an N.W.A. reunion album.

Chicago (Kanye West)—When Kanye West dropped his debut album “The College Dropout,” he promised that he would change the rap game and he definitely did.  He made the backpack rapper cool and he made taking chances cool again in hip-hop.  His upbringing made his lyrical content totally different than rappers with more street cred and the hip-hop game desperately needed that.  He is a true artist, working with everyone from Paul Wall to Taylor Swift and Sir Paul McCartney.

Houston (Scarface)—H-Town is known for the screwed and chopped sound popularized by D.J. Screw and used by Slim Thug and UGK, but Scarface (as a solo artist and as a member of the Geto Boys) shined the brightest because his music was universal.  Hands down, he is the best rapper ever from Houston.  From his first solo album “Mr. Scarface is Back” to the Geto Boys breakthrough album “We Can’t Be Stopped,” Brad Jordan rapped about everything from mental illness to street life to the Book of Revelations.  At a time when southern rappers were criticized for their lyrical content, Scarface showed that true lyricism and intelligence knew no boundaries, and that the South definitely had something to say.

Philadelphia (Beanie Sigel)—Philly has produced some great hip-hop superstars like Eve, Meek Mill and Will Smith in addition to some great lyricists like Freeway.  However, none could touch Beanie Sigel on the mic.  One of Jay-Z and Damon Dash’s most talented protégés, Beans appeared on monster records such as “This Can’t Be Life” with Jay-Z and Scarface, “Roc the Mic” with State Property and “Beanie (Mack B****).”  Unfortunately, Beans never quite lived up to his potential because of legal troubles.  The street life that he rapped about caused several hiatuses during his career and he has not reached the pop mainstream like other artists from Roc-a-fella Records.

Phoenix (Roca Dolla)—The A-State does not have many artists in the rap game to represent for them, but Roca Dolla is one of the greatest to come from Arizona.  Not only an artist, he is an entrepreneur giving the best emcees in Phoenix an opportunity to shine via his imprint 5Fith Coast Records.  His album “Roca is a Classic,” boasts some underrated bangers like “A-State” and “Swell.”

San Antonio (Milli Mars)—The latest artist to come out of the “Alamo City” is a cat by the name of Milli Mars.  “Milli Mars: a metaphor for change.  Mars, space, wanting to get away totally.  I love Greek mythology, and Mars is the god of war.  Milli: a thousand gods of war.  It’s just me, I can’t give anybody anything else,” the rapper said about his name and his style.  Unlike many young rappers, Milli Mars loves music with a message such as the material produced by Public Enemy and N.W.A.  His songs like “Tokyo Noir” and “The Battle of So-Chon” are gaining momentum on YouTube and he is working with Dr. Teeth, the most in-demand video producer in Houston.

San Diego (Jayo Felony)—Besides selling millions of records and having his songs featured on video games, Jayo Felony will always go down in history as being the first rapper from San Diego to sign with a major record label (Def Jam).  He has collaborated with some of the best rappers in the game like Scarface, 8Ball and M.J.G., Ice Cube and Big Mike while also working on soundtracks to movies like “Jason’s Lyric” and “Rush Hour.”  His collaboration with Method and DMX on “Whatcha Gonna Do?” is the highlight of his groundbreaking career.

Dallas (The D.O.C.)—The Metroplex has produced many successful musicians like neo-soul diva Erykah Badu and gospel pioneer Kirk Franklin, but when it comes to hip-hop no one could do it better than The D.O.C.  Although he had to go to Cali and hook up with Dr. Dre and N.W.A. to break through, he was from Dallas through and through.  His debut album was classic and he became Dr. Dre’s first protégé to make it big.  The album produced classics like “The Formula” and “It’s Funky Enough.”  Unfortunately, a horrific car accident made it difficult for him to talk and prematurely ended his career behind the mic.  Nevertheless, he continued to work for Dre, ghostwriting many songs from the classic album “The Chronic.”

San Jose, Calif. (2Pac)—When one thinks of San Jose, Calif. they think of the entire Bay Area, which consists of the Oakland, Calif. and San Francisco area.  And when one thinks of 2Pac, they think of a nomad.  Sure, he was born and raised in Harlem, N.Y., spent the majority of his high school years in Baltimore.  But he spent his last year in high school in Marin County, Calif. and his professional rap career was birthed in the Bay Area thanks to his affiliation with Digital Underground.  Tupac Shakur is possibly the best rapper ever, and arguably hip-hop’s most influential artist.  He was able to combine hardcore street life with Black Nationalism to create a distinctive voice in hip-hop.  Nineteen years after his death, his estate is still releasing new music and there is a biopic on his life coming soon.