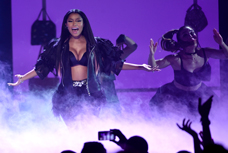 Nicki Minaj performs at the Billboard Music Awards at the MGM Grand Garden Arena on May 17 (Photo Credit: Chris Pizzello/Invision/AP).

A king is not a king if he does not have a queen by his side.

Since 1979, male emcees have dominated the hip-hop scene.  But throughout history, many women have stood tall against their male counterparts and made an indelible mark on the hip-hop culture.

As a result of female rappers not always getting the respect that they deserve, RegalMag.com has chosen to shine a spotlight on the five greatest albums by a female rapper from number five to number one.

“Pink Friday” by Nicki Minaj—No other female rapper in the history of the game had more of a buzz before their debut release than Nicki Minaj.  Like Snoop Dogg decades before, Nicki Minaj was already a legend before “Pink Friday” dropped, and her legend grew due to eight hit singles from the album.   Songs like “Super Bass,” and “Fly” became international hits, while “Your Love,” “Check it Out,” “Right Thru Me” and “Moment 4 Life” climbed up the U.S. Billboard Hot 100.

“Black Reign” by Queen Latifah—You just don’t mess with the queen, especially when it comes to lyrical content and subject matter.  At the time of the release of “Black Reign” in 1993 few knew that Dana Owens would become an award-winning actress and an accomplished jazz singer.  But we all knew she had something unique to say with songs like “U.N.I.T.Y.” and “Just Another Day.”  The album was certified Gold and reached number 15 on the Billboard R&B/Hip-Hop albums chart.  On the classic “U.N.I.T.Y.,” Latifah challenged men who referred to women by the B-word or H-word, and threatened men who engaged in domestic violence against women.

“Ruff Ryders’ First Lady” by Eve—The song “Love is Blind” is like “U.N.IT.Y.” 2.0.  While Queen Latifah used her platform to discuss misogynist and domestic violence; Eve made it personal and emotional.  “Love is Blind” is the perfect song for women who think that love is supposed to hurt.  Despite the realness of that song, “Ruff Ryders’ First Lady” did not just male bash.  It also uplifted the good men with the hit song “Gotta Man.”  The album also included a remix to the hit song “What Y’all Want.”  Eve’s debut proved that female emcees could be beautiful and still rap with substance.

“Naked Truth” by Lil Kim—Other rappers like Mystikal, C-Murder and Mac should have taken heed to Lil Kim’s business acumen.  Before being locked up, she set herself up right with an album that was released on the day she entered prison and a reality show documenting the process.  The single “Lighters Up” is still a party anthem while “Whoa” managed to reach number 43 on the U.K. charts.  “Naked Truth” is historic because it was the first solo album by a female rapper to receive a coveted five out of five mic rating from The Source magazine.

“The Miseducation of Lauryn Hill” by Lauryn Hill—While “The Miseducation of Lauryn Hill” encompasses many genres other than hip-hop, “L-Boogie” is one of the coldest emcees to bless the microphone, male or female.  This album is one of the greatest albums ever made and rivals anything in the 1970s released by Stevie Wonder or Marvin Gaye but with a hip-hop meets reggae vibe.  On songs like “Lost Ones,” “Doo Wop (That Thing)” and “Everything is Everything” Hill proved that late 1990s hip-hop could have the same social impact as hit 1980s albums from artists like Public Enemy and Boogie Down Productions.