Is College Tuition Worth Cost? Experts Weigh In 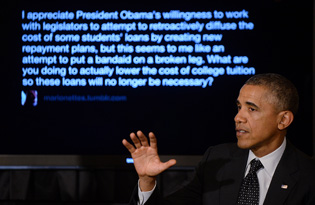 College Tuition: Is it Worth It in the Long Run?

With college tuition rising and jobs hard to find, many high school graduates often wonder if a college education is worth the cost of college tuition.

According to a Washington Post article based on Pew Research Center data, “a majority of Americans said that college wasn’t ‘worth it’ because it didn’t provide students with good value for the money they and their families spend,’ and in the recent household survey by the Federal Reserve Board, where 37 percent of respondents said that the net financial benefit of their education was negative.”

Furthermore, with many college graduates working at jobs not requiring college degrees, RegalMag.com wanted to know what experts had to say about the high cost of college tuition and what needs to change for students to get a return on their investment.

“What you thought you were going to get in quality of life by going to that college, you’ve just undermined with the amount of debt you’re taking on…When you put a cap on loans, the money’s not available to universities and colleges.  They have to either raise student aid or lower [college] tuition, or some combination of the two.”—Mark Cuban, owner of Dallas Mavericks

“So we’re going to make sure students who receive federal financial aid complete their courses before receiving grants for the next semester.  We’ll make sure to build in flexibility so we’re not penalizing disadvantaged students, or students who are holding down jobs to pay school.  Things happen.  But the bottom line is we need to make sure that if you’re getting financial aid you’re doing your part to make progress towards a degree.”—President Barack Obama

“Millions of young people…can’t buy homes, they can’t buy cars…all because they are struggling under the weight of student loan debt.”—Senator Elizabeth Warren

“The vastly bigger problem is the hundreds of thousands of young people who emerge from college with a modest amount of debt yet no degree.  For them, college is akin to a house that they had to make the down payment on but can’t live in.  In a cost-benefit calculation, they get only the cost.  And they are far, far more numerous than bachelor’s degree holders with huge debt burdens.”—David Leonhardt, New York Times

“When you look at the stats on student debt and student loans it’s frightening.  We need to make kids aware of this big decision that’s one of the biggest investments of their life.  Across the board folks are looking at other options, perhaps other ways to do things.  The medical field, for example, with all the jobs that are opening up…technicians that make very good salaries, but require less education are a great value for young people,”—Jack Kosakowski, CEO, Junior Achievement