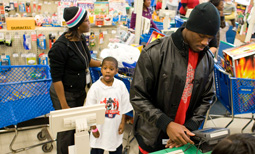 In journalism, editors and producers often say if it bleeds it leads.

That means negative stories like violence and destruction often take precedent over the fluffier stories in a newspaper or a newscast.

This week alone, negative stories on athletes like Josh Gordon (substance abuse) among others have flooded networks like ESPN, sometimes overshadowing one of the best Super Bowls in history.

Unfortunately for Black athletes, the fact that negativity often trumps positivity for the attention of many Americans might lead some to believe that most of them are felons, drug addicts, thugs or abusers of women.

Though many know that is not the case, the positive contributions that many Black athletes make to their community is often ignored in the era of reality television and fabricated buffoonery and tomfoolery.

Although we could never pay homage to all of the Black athletes that impact their community everyday, RegalMag.com would like to shine the spotlight on five who are definitely not shunning their responsibility as role models.

Andre Johnson (NFL, Houston Texans)—Wide receiver Andre Johnson is a man of few words.  Unlike the diva receivers of yesteryear, Johnson lets his actions on and off the field do the talking for him.  The Miami native recently hosted a golf tournament, raising $30,000 for the Houston Area Women’s Shelter.  According to AndreJohnson80.com, “Johnson wants to convey to all youth that no matter what your circumstances are, if you work hard, you can achieve your goals.  He seeks to encourage today’s youth to reach their full potential in both athletic and academic pursuits.”  Every Christmas, he rewards children of Houston with an 80 second shopping spree at a local toy store.

Chris Paul (NBA, Los Angeles Clippers)—Everyone from basketball fans to State Farm knows Clippers point guard Chris Paul is fond of assisting others.  According to NBA.com, Paul has worked as the “spokesperson for Prevent Child Abuse America, a national organization that works to ensure healthy development of children.”  Furthermore, his CP3 Foundation aims to promote education, health, sports and social responsibility via scholarships and community service projects.  Unlike many, Paul believes writing a check is great, but being physically involved in the lives of others makes the real difference.

Dexter Fowler (MLB, Chicago Cubs)—Dexter Fowler may not be a household name to the casual baseball fan, but that does not stop him from using the MLB platform to affect change in his community.  According to the Houston Astros, Fowler and his wife Aliya have been involved in the community since the beginning of his career.  He dedicated one dollar for every new Twitter follower during the Christmas season to the And Justice For All (AJFA) organization based in Utah.  The AJFA supplies civil legal assistance to battered women, homeless citizens and seniors living without a retirement income.

Tiger Woods (PGA)—Tiger Woods might not be the best golfer in the world anymore, but that has not distracted him from his duties with the Tiger Woods Foundation.  The foundation has awarded nearly 100 scholarships via a scholarship fund named after his late father Earl Woods, enabling many great students to attend prestigious universities.  The golfing great has also enacted the Tiger Woods Learning Center, which believes that students learn best by doing.  According to TigerWoodsFoundation.org, “Our STEM-focused subjects range from chemistry to engineering to marine science and beyond.”