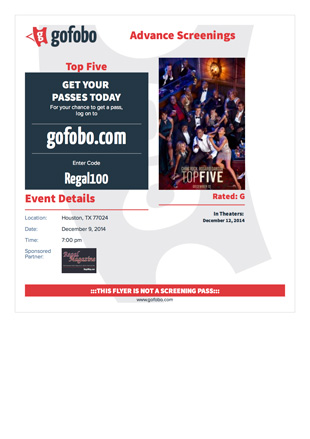 That got the editorial team at RegalMag.com thinking of its own list of top five rappers.

Our top five emcees would definitely include 2Pac, The Notorious B.I.G., Rakim, Scarface and probably Jay-Z.

The first four were no brainers for us, but the fifth was a struggle choosing between the likes of Jay-Z, Eminem and Nas.

Undoubtedly, “Top Five” has probably the five best comedians in the game such as Rock, Kevin Hart, Cedric the Entertainer, Tracy Morgan and Adam Sandler.

Although you may disagree with RegalMag.com’s list of rappers, you cannot argue that receiving free tickets to an advance screening of “Top Five” has to be in your top five things to do over the holiday season.  To receive the free tickets in Houston for Dec. 9, simply click here and use the code Regal100.