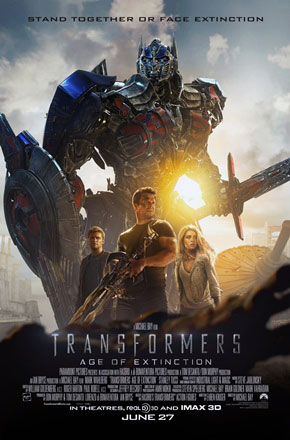 More Than Meets the Eye

Michael Bay has done it again with the “Transformers” franchise!

Nearly three hours long and action packed, audiences will not be disappointed with the fourth installment of this Hasbro creation.

“Transformers: Age of Extinction” has an entirely new cast with Mark Wahlberg as Cade Yeager, a mechanic/inventor, and soon Autobot ally.

The movie opens by reminding the audience of the massacre in Chicago five years prior, leaving a bad taste on planet Earth against the alien species.

No longer are the Autobots allies with humanity, but are in hiding, being hunted down and slaughtered by a CIA operative.

Unbeknownst to the president of the free world and the rest of humanity, this CIA mission is to hunt down Decepticons who apparently started the Chicago War and bring them to justice.

However, the head of the CIA, Harold Attinger played by Kelsey Grammer, has other plans in mind, which are driven by greed, power and the ultimate extinction of all Transformers as he blames them for the massacre in Chicago.

New character Lockdown, (who transforms into a black 2013 Lamborghini Aventador LP 700-4) a malevolent bounty hunter that steals modifications from his fallen enemies and adds them to his own arsenal, has been sent by the Transformers Creator, (the Quintessons) to bring Optimus Prime back to Cybertron, home of the Transformers.

A face which turns into a massive machine gun, Lockdown has a deal with Attinger to track down Transformers for parts and Optimus Prime in exchange for “the Seed,” a powerful bomb that turns a city-wide area of land into Transformium, which is being used by KSI founder Joshua (Stanley Tucci), an inventor who also has a stake in Optimus being found to create “new and improved” Transformers…hint Galvatron, formerly Megatron.

Diehard Transformer fans will be excited to see the introduction of the beloved Dinobots into the storyline.

The movie depicts the rough beginning stages of an alliance between the Autobots and Dinobots having been captured and imprisoned by Lockdown. Optimus frees the untamed species from their cages.

Staying true to their nature, instead of being grateful for their release, they turn on Optimus who has to convince them they are on the same team.

Hopefully, fans will get to see how this relationship and the Dinobots develop because their humanoid side is not shown in this film.

In conclusion, as a fan of the “Transformers” I recommend seeing this film.

Despite being almost three hours long with corny jokes throughout the movie along with trying to figure out the connection between “Dark of the Moon” to “Transformers: Age of Extinction,” the non-stop action and the return of Galvatron makes up for it!