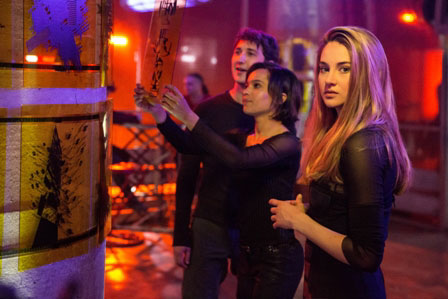 Tris Prior (Shailene Woodley) is Catniss Everdeen light.  The character Catniss, popularized in “The Hunger Games” franchise is a much tougher, meaningful version of the character Tris in “Divergent.”

“Divergent” takes place in futuristic Chicago after a war wipes out most civilization.

The people survive, allegedly, because their society is set up into distinct factions or groups based on personality traits.  Members of various factions often state, “faction over blood,” to stress the importance of their allegiance to their chosen group over their family.

At a certain age, all teenagers are required to take an aptitude test, which determines what faction they should belong to, regardless of their upbringing.

Tris and her brother Caleb (Ansel Elgort) are born into the Abnegation faction, which preaches selflessness.  Being selfless comes naturally to her brother, but it is something that has never fit easily with Tris’ personality.

On the day of the aptitude test, Tris’ results show that she is Divergent, which means she does not fit into just one of the factions.  The test administrator warns her not to tell anyone about the results because Divergents are viewed as a threat to the natural order present in their society.

Upon choosing a faction, new members must complete an initiation process.  If they do not pass the process, they are left without a faction, living as marginalized citizens with no family or group to belong to.

To make matters worse, after Tris joins Dauntless she learns of the Erudites’ plot to destroy all Divergents and Abnegation because of the threat they pose to the status quo.

“Divergent” is genius in that it captures an already developed female audience because of the success of other books like it, and combines it with the fighting and science fiction elements that many males will like.

The fighting scenes are excellent and moviegoers, who did not read the books, will be on the edge of their seat waiting to learn the fate of Tris, her friend Four (Theo James) and her parents played by Tony Goldwyn (“Scandal”) and Ashley Judd.

However, “Divergent” cannot stand up to the juggernaut that is “The Hunger Games,” which it will no doubt be compared to.

The science fiction book adaptation subgenre is a very lucrative field now, but it is also a very crowded field as well.

Lisa Bonet and Lenny Kravitz’ daughter Zoe Kravitz, who plays Christina, proves apples do not fall too far from the tree when it comes to acting talent.

In addition, director Neil Burger does a good job of portraying the story on film, but “Divergent” will unfortunately suffer from a lack of originality.

“The Hunger Games” has the entire teenage science fiction genre in a chokehold, and all other films like it will probably pale in comparison.