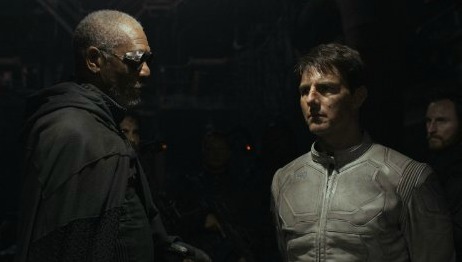 I thought the Oblivion film represented the final push for a complete Tom Cruise comeback.  Boy, how wrong I was.  Despite the hype generated for the Oblivion film, the movie will just give ammunition to Cruise naysayers and haters.

In the Oblivion film, the moon is destroyed in 2017, damaging half of the planet Earth.  The planet is invaded by extra-terrestrial forces, but the inhabitants of Earth fend off the alien invaders.

Nevertheless, as a result of the war, the Earth becomes uninhabitable.  Earthlings are forced to live away from the planet; siphoning water from Earth’s ocean’s to survive on foreign soil.

Jack (Cruise) and Victoria (Andrea Riseborough) are hired to fend off the scavengers (or “scavs”) from damaging the Earth’s resources.  Besides the “scavs,” Jack and Victoria are the only humans remaining on Earth.  The Earth’s resources are protected by drones that can decipher friend or foe and it is Jack’s job to make sure the drones are fully functional and protecting the planet from the “scavs.”

The Oblivion film benefits from beautiful visual effects and cinematography and star power such as the great Morgan Freeman who plays Malcolm.  But that is basically all it benefits from, unfortunately.

Moviegoers will also empathize with Jack’s broken love life.  He constantly has dreams of a special woman from his life, but his memory has been virtually wiped clean by his superiors so that he can complete the task at hand.

Furthermore, the Oblivion film definitely does not suffer from “predictable syndrome,” which seems to ail many supposed blockbuster movies.

However, the unpredictability is not necessarily a good thing for the film, Cruise or the other actors involved.

The Oblivion film is chock full of jargon, which might make it difficult for the casual movie fan to follow.

Cruise has never been confused with acting greats Al Pacino or Jack Nicholson, but the film definitely does not represent his best work as a thespian.  To make matters worse, for the first 30 minutes of the film, the scenes consist of only three characters who do not have the chops to carry such a large film.

The veteran actor Cruise was able to display some of his talents with his stunts, but his acting seemed to take a step backwards in this movie.

Furthermore, for an actor who has been labeled as “weird” in recent years, a weird film may not have been the best bet to get back into America’s good graces.

The film does not even get the best performance out of Freeman, another veteran of the Hollywood scene.

However, the film will benefit from slick promotion and ample advertising and will surely do well opening weekend at the box office, but that is not enough to make up for the estimated $120 million it took to create the film.