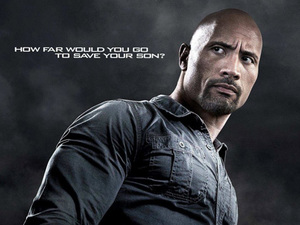 Rat.  Stool pigeon.  Snitch.  Being labeled as such in modern times will get you ostracized in the community and possibly even killed depending on the situation.

But what if snitching was the only way to free your college-bound son from a wrongful incarceration?  Would you still consider snitching a dishonorable thing?  However, what if snitching to protect one child would put your other family members and acquaintances at risk for retribution.

This is the dilemma that Dwayne “The Rock” Johnson finds himself in the Snitch movie as he is forced to decide how far he will go to save his young family.

John Matthews (Johnson) runs a successful trucking company.  Although he has succeeded in business, he has not always succeeded in life.

His first marriage to Sylvie (Melina Kanakaredes) ended in divorce.  He subsequently remarries and starts another family, but that reality has strained his relationship with his oldest child Jason Collins (Ravi Gaavron), who changes his surname to his mother’s maiden name to spite his father.

Despite trying to financially provide for Jason, not having a strong male influence on a daily basis has an adverse effect as Jason begins experimenting with drugs and other bad behaviors like many teens.

However, when a friend convinces Jason to let him ship ecstasy pills to his mother’s house, he is arrested and faces 20 years in prison because of mandatory minimum laws.  Jason allows his friend to ship the drugs to him because he wants to try the drug with his girlfriend, but when his friend is arrested while shipping the package, he agrees to snitch on Jason to get a lighter sentence.

In the Snitch movie, Jason is offered the same deal as his friend if he cooperates with the DEA and snitches on a drug dealer.  But since he knows no real drug dealers he refuses to simply set up one of his friends for personal gain.

After seeing his son endure torturous beatings from more hardened criminals while incarcerated, John takes it upon himself with the unwilling help of his employee Daniel (Jon Bernthal) to frame a known drug dealer in an attempt to free Jason from his wrongful incarceration.

The Snitch movie is simply fantastic.  Although we see the stereotypical action that we have grown accustomed to from Johnson’s movies, the Snitch movie allows him to show off his dramatic acting chops and he does not disappoint with his performance.

Unfortunately, the media is inundated with depictions of deadbeat fathers who shun their responsibility.  On the flip side, when we do see positive images of fathers, on sitcoms for instance, they sometimes show the father as unrealistically perfect.

What we get in the Snitch movie is the true depiction of a father striving to be a perfect father, but sometimes failing despite having the best intentions.  John is not the perfect father, but he realizes his flaws and will do anything to correct those flaws and fix his broken relationship with Jason.

Furthermore, the Snitch movie does an excellent job of not glamorizing the drug game like so many crime thrillers do.  They show men like Daniel, played to perfection by Bernthal, who have made mistakes and are trying to give their sons a different future than their past.

The Snitch movie does a decent job of highlighting the problem with mandatory minimums, especially in the closing credits, however the film would have had a much more profound impact on these unjust laws if they dedicated more screen time to this issue.

Furthermore, in the film Michael K. Williams plays drug lord Malik also to perfection.  This is not necessarily a good thing since it seems he is being typecast.  However, he does an excellent job in those stereotypical parts.

Nevertheless, the Snitch movie is an excellent way for fathers to bond with their children, and sons in particular.  It also shows what real fatherhood and manhood is about, selfless sacrifice.

And maybe it will change the negative connotation behind the hated label of a snitch.