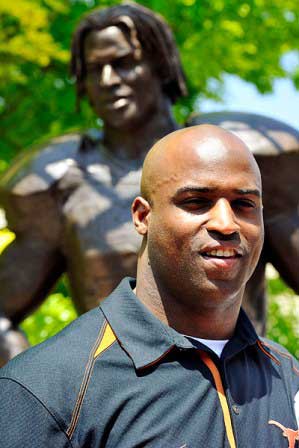 It’s been nearly two years since former running back Ricky Williams was living the life as a professional football player.

Now retired from the league, his life as a professional football player is in the rearview mirror as he embarks on new adventures.

“Life has been amazing,” Williams told Regal Magazine. He’s found himself traveling, playing sports and hanging out with friends. Something he says he couldn’t do as much before, only having a few months off a year.

Besides living the life as a fairly newly retired player, Williams has indulged himself in numerous projects to keep himself busy. One of his projects is a foundation that has been around for over a decade, The Ricky Williams Foundation.

The Ricky Williams Foundation was established in 1999 in light of all of the success coming his way in the league.

“I always wanted to give back so I figured the way to do that is set up a foundation.”

He said the foundation started off being about education, but after two years it went into a different direction and became more about inspiring people and empowering them.

The foundation involves different inspirational workshops as well as after school programs for low-income students in Austin, Texas that may not otherwise have that opportunity. Being raised in a single parent household himself, Ricky Williams was able to use his personal experiences to help relate to the children that are a part of his organization.

“I don’t necessarily do it for fulfillment,” said Williams. “It’s an expression of who I am. It’s what I call generosity.”

Giving back was something that Ricky Williams had always wanted to do in light of his success.

However, his views on where exactly he wanted to put his time, money and energy came into perspective after seeing one of his friend’s perspectives on philanthropy.

This new outlook on not just giving back, but giving back with a purpose and to something meaningful to him personally meant a lot to Ricky Williams when it came to forming his foundation.

“What I noticed (was) that you give money to someone off the street asking for money, yeah you might get an emotional return but it won’t return on you. But if you give money to things you enjoy what you get back in return is something greater,” said Williams.

While the foundation has been successful, Ricky Williams says getting others involved has been a bit tricky.

“Usually people’s verbal reactions and kind of what they do is different,” said Williams. “A lot of people say it’s a good idea and they’re happy I’m doing it, but I haven’t seen people really contributing.”

With or without the support from others, Williams still values the impact he makes on those associated with the organization. But something he hopes people take away from the foundation is the value of generosity.

The philanthropy work that Williams has done has kept him busy thus far in his retirement.

Although he has retired in the past and made his way back into the league, he said he has no plans on returning to the National Football League.

Alongside working for his foundation, he has also joined the ESPN family as a sports commentator.

While many former athletes find themselves sitting at home and pondering on their old glory days, Williams seems to be enjoying his next phase in life and doesn’t look to be stopping anytime soon.