Regal Honors Anniversary of March on Washington in 1963 in D.C. 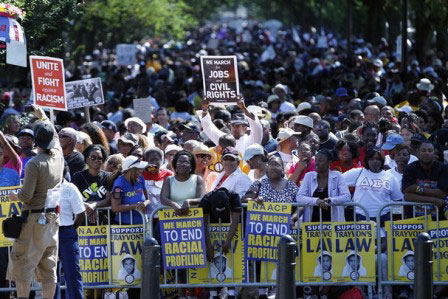 Thousands gathered in Washington, D.C. to commemorate the 50th anniversary of the March on Washington in 1963 (Photo Credit: NaplesNews.com).

Thousands Commemorate the 50th Anniversary of March on Washington

Throngs of people descended on the National Mall Saturday to honor the 50th anniversary of the March on Washington in1963, when more than 250,000 civil rights activists rallied for jobs and freedom.

Albertina Lane, who stood shoulder-to-shoulder with advocates for social and economic equality during the first march, reflected on the day that she and others made history with Rev. Dr. Martin Luther King Jr., who delivered his famous “I Have a Dream” speech August 28, 1963.

“It was a very serious time in our life,” Lane said. “It was very important for us to just speak and make it known that we wanted to be included as full citizens in America.”

As the masses continued to file in and around the National Mall to hear from civil rights activists, labor and political speakers, Lane went on to describe the impact of hearing Dr. King’s vision for America, personally.

“We [activists] were filled with so much emotion and so much pride to have such an eloquent Black man speak our vision, our needs, and make it known that Americans needed to look at what he was saying [his dream] for everyone; not just Black people, but for all Americans,” Lane said.

Longtime Pastor Eugene Fogt, 73, participated in the March on Washington in 1963. The Caucasian advocate for racial equality remembers being told to think twice about taking a stand for social justice.

“There were others around me, not my wife or anyone else that I knew well, that said ‘you shouldn’t do it [ march]… there could be violence or something that might ruin your reputation,’” Fogt, donned in a neon green T-shirt that read “I marched in 1963” on the back of it, said.

“[I responded] no I’m going to do it… I was someone who believed very much in the civil rights struggle, and I’ve always believed that all people are made equally,” said Fogt, who arrived from Houston the day before.

Like Fogt, Joan Mulholland, 72, who left Duke University at the age of 19 to join the Freedom Riders, challenged the views of proponents for racial segregation. In June 1961, police arrested the White southern native in Jackson, Miss.

Mulholland was sent to Parchman State Prison Farm, where she was put on death row for a brief time period. The civil rights pioneer later participated in a famous sit-in, in June 1963, at a Woolworth lunch counter in Jackson, where angry White mobs doused her and others in sugar, ketchup, mustard and coke.

“1963 was an awful year,” Mulholland, who stood arm-in-arm with one of her Delta Sigma Theta Sorority, Inc. sisters, said. “We had Martin Luther King in the Birmingham jail, the assassination of Medgar Evers, the fire hoses and the police dogs on the little children.”

“It’s good to see how far we’ve come… but there are constant reminders of how far we still have to go,” the now-Arlington, Va. resident  said.

Mulholland’s opinion on how far the nation has come, echoed several speakers, civil rights groups and families, who stood among an estimated 100,000 people, to declare that King’s dream has not totally been fulfilled.

“We are here today to continue to stand, not only to commemorate what happened 50 years ago, but to continue the fight for jobs, for justice, freedom and peace,” AnneMarie Mingo, who flew in from Atlanta to march with her parents, said. “Today we’ve come to be empowered, to empower others, to inspire others, and to be equipped to go back to our communities and continue the fight.”

Mingo, who is in the process of completing a doctorate in Social Ethics: Black Church Women during the Civil Rights Movement, shared in frustration with many who condemned the removal of a key provision to the Voting Rights Act of 1965— legislation that required certain states to get federal approval before changing voting laws.

“I think that Dr. King would have a fit right now because there were so many people who helped to make that possible, so that equality and justice, and the lack of fear would be there as [people] use their God-given right, in this nation, to be able to vote,” she said.

Like Mingo, thousands converged, with signs in hand under clear blue skies, to continue the peaceful fight for issues like jobs, equal opportunities, equality for the LGBT community and immigration reform.

Ricardo Campos, 24, a member of Casa de Maryland, a non-profit that seeks social justice for low-income immigrant communities, joined the commemoration of the March on Washington in 1963 to keep King’s dream for racial equality alive.

“We are still seeing oppression, we are still seeing cases like Trayvon Martin, as well as other cases where African Americans and immigrants are being deprived from opportunities… we need to keep fighting,” Campos said. “This [lack of equality for immigrants] is affecting millions and millions of families that are still living in the shadows.

The acquittal of George Zimmerman, who shot unarmed teenager Martin in Sanford, Fla. was another area of justice that civil rights advocates focused on.

At one point, eyes were locked on a group of African American teenagers, both male and female, who stood like statues in front of the World War II Memorial.

The teens wore jeans and white sweatshirts that had Martin’s picture on the front of it and a message that read, “I’m a survivor” on the back.

Saturday’s event preceded the actual anniversary of the March on Washington on August 28 in 1963.

President Barack Obama stood in the same spot on the Lincoln steps as Dr. King, to deliver his speech at the second march titled “Let Freedom Ring.”

He was joined by former Presidents Bill Clinton and Jimmy Carter, King’s family, celebrities and other longtime civil rights activists, who delivered speeches as well.

While Mingo and her family weren’t able to hear the first African American president deliver his speech in person, she said she often wonders what Dr. King and others—who helped to organize the march— would think of  President Obama’ s leadership.

“There are many women whose voices I’d love to hear challenge President Obama, challenge all of us, and not only accept the fact that we’ve been able to elect a Black president, but to support him and to support those other persons, who can help create legislation and policies that will make a difference,” Mingo said.

“You can begin to change the hearts of people, it takes a very long time, but it’s also helpful to change the policies that are on the books, so that the laws are in favor for various advancements that can be there,” she said.