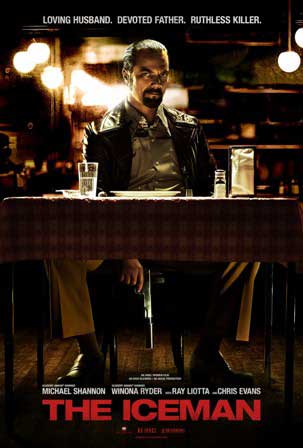 The Iceman film is the true story of contact killer Richard Kuklinski (Photo courtesy of RottenTomatos.com).

A contract killer must have ice water in his or her veins.  The ability to take a life like one takes out the garbage requires a disconnect from morality and the absence of a heart.

The true story of Richard Kuklinski has reached the level of infamy in mafia fandom over the last couple of decades because of the many documentaries done on his life as a contract killer and the fact that his wife and children believed that he worked in the field of finance.

In The Iceman film, director/co-writer Ariel Vromen depicts Kuklinski as a devoted husband, father and mass murderer, and what a delicate tightrope Kuklinski had to walk to keep the façade up in his everyday life.

Possibly because of the fact that Kuklinski (Michael Shannon) and his brother Joey (Stephen Dorff) endured a traumatic and abusive childhood, Richard wanted to have a normal and nurturing home life despite his truly violent nature.

From the beginning of his courtship with his wife Deborah (Winona Ryder), their relationship was built on lies.  Richard tells Deborah that he works dubbing Walt Disney movies when in actuality he is a bootlegger of pornographic films.

However, when Roy’s “flunkee/surrogate son” Josh (David Schwimmer) kills two drug dealers connected to the Gambino crime family, both of their lives are on the line and to avoid a full scale war, Roy orders Richard to take a leave of absence.  The lack of work ultimately leads to cracks in his carefully-crafted façade at home.

The Iceman film succeeds because it depicts how family and friends can be totally clueless about what their loved-ones are truly capable of doing.  Deborah enjoys the fruits of Richard’s labor, but never truly investigates where he gets his money.  She does not even find it suspicious when she finds $30,000 cash in the pocket of his blazer.

However, The Iceman film does not necessarily focus on each contract killing, but gives a snapshot of many killings and focuses on how his family life was not adversely affected much earlier in his life.

It also shows that even the so-called heartless have a “heart” somewhere buried beneath their tough exterior.  Richard refuses to kill women and children and Roy has a soft spot in his heart for Josh, despite the heat he brings on Demeo’s crime syndicate.

The Iceman film only suffers because it encompasses such a large period of time (from the 1960s to the 1980s), but seems to put too much emphasis on Richard’s early adulthood before he begins working for the Demeo organization.

Furthermore, The Iceman film touches on Richard’s relationship with his family once his façade is broken, but it would have been great to see what happened to his wife and children after his true cold-hearted nature was exposed.