‘Homefront’ Shows Length that Fathers Will Go to Protect Family 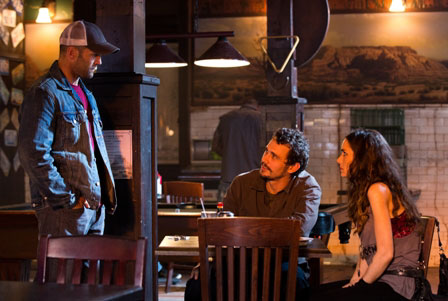 Rats are usually cowards.  They tell on their comrades to avoid punishment then run to the hills to avoid retribution.

Many people from the streets say that snitches get stitches, but for Broker (Jason Statham) and his former comrades in “Homefront,” that cliché might make more sense in reverse.

In the film “Homefront,” Broker, an undercover DEA agent, infiltrates an underground meth operation.  When an arrest of the drug dealers goes awry, a son is dead at the hands of a police officer and his drug dealing father is incarcerated.

To escape that lifestyle, Broker retires to the rural confines of Rayville, La. with his 10-years-old daughter Maddy (Izabela Vidovic), only to find more conflict and more threats of violence from the locals who do not accept newcomers easily.

Trying to escape a past of violence and destruction is hard for Broker and Maddy who constantly find themselves on the run from thugs and hoodlums looking to make a name for themselves in the drug game.

“Homefront” is the typical tough guy action film, but one that delves into the psyche of those affected by drugs, violence and dysfunctional families.

Sylvester Stallone (screenwriter) and Chuck Logan (novelist) do an excellent job of showing the effects that violence has on parents, children who are forced to live in hiding and/or without a parent and the toll that dysfunctional households have on our children.

The film deals with the effects that true, underworld violence has on those who are only partly affiliated with the criminal lifestyle.  Often, they find themselves much more involved in the lifestyle than anticipated, desperately searching for a way out.

Although “Homefront” deals with some of the psychology behind childhood bullying, verbal spousal abuse and dating after the death of a spouse, those aspects do not take away from the gritty action and violence one expects from a Statham butt-kicking movie.

Some of the violent action scenes will literally have moviegoers jumping out of their seats because of the suddenness and unpredictably of the violence.

The filmmakers behind “Homefront” also do a good job of making the film authentically Cajun, not overdoing Louisianan, Southern accents but infusing the film with local vernacular like “ya heard me.”

The opening and closing aerial shots of Louisiana and the Mississippi River are simply breath taking and the action scenes are shot with an aura of reality.

However, “Homefront” will leave moviegoers hanging when it comes to relationships and romance.  We never really get to see if Broker finds love again after the death of his wife and whether Maddy gets that full-time female role model that is desperately needed for a girl of her age.  It is obvious that Maddy spends too much time with her father as evident with her beat down of school bully Teddy Klum (Austin Craig).

Nevertheless, Broker is the one rat or snitch worth cheering for.  Men will appreciate the lengths to which he is willing to go to protect his home front and to protect his young daughter.  Sometimes protecting loved-ones means being willing to kill or be killed, and Broker is down for both regardless of how the streets feel about it.