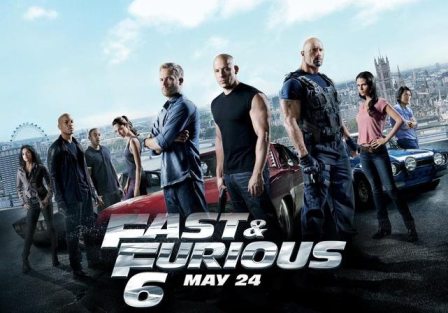 The limit to sequels usually is two.  After the third installment of a franchise, unique storylines have typically run their course and popular characters become boring, just ask critics of “The Hangover Part III.”

Nevertheless, after six installments of the “Fast & Furious” franchise, conventional wisdom proves not to be wise at all, as “Fast & Furious 6” proves just as fast and just as furious as its predecessors.

Like any law enforcement official, Hobbs (Dwayne Johnson) despises criminals.  But when criminal mastermind Shaw (Luke Evans) destroys a Russian convoy and effortlessly avoids capture by Russian officials, Hobbs knows that it will take criminal minds to bring down a true criminal mastermind.

He attempts to persuade Dom (Vin Diesel) to reassemble his crew to bring down Shaw, but to do so the crew has to return to a country where they risk incarceration because of their past capers.

Furthermore, the crew is enjoying the fruits of their $100 million dollar heist from Reyes in the fifth installment of the franchise, which means that it would almost take a miracle for them to give up their mansions, luxury cars and private jets to pull off another score.

However, “Fast Five” ended with a miracle of Lazarus-like portions when it is discovered that the love of Dom’s life Letty (Michelle Rodriguez) is still alive, despite the fact that she was written off as dead.

Hobbs is able to promise Dom that he can return Letty to him if he accepts his offer and reunites the crew, but Dom wants more like the cute little girl in those AT&T commercials.  He wants full pardons for him and his crew, something that Hobbs reluctantly agrees to.

However, the only problem with their plan is that Letty does not remember her past life with Dom and she now works for Shaw’s crew, a group of misfits, just as bada** as Dom’s crew, and as Roman (Tyrese Gibson) points out, a crew that physically resembles their crew with the so-called good-looking brother being his mirror image.

“Fast & Furious 6” is blessed with a genius of a screenwriter in Chris Morgan who is responsible for other installments of the lucrative franchise and a brilliant visionary of a director in Justin Lin.  The director takes us on a whirlwind from Canary Island, Spain, Moscow, London and many places in between with beautiful aerial shots that really capture the beauty and essence of those locales.

Nevertheless, the only criticism of the film is the fact that it is chock-full of car, computer, police and military jargon, which might make it hard for a novice to understand.  Additionally, unlike “Fast Five,” one has to see the previous film to follow the plot of “Fast & Furious 6.”

However, that is not to say that the film will only resonate with Furious fans.  Anyone with a pulse will enjoy “Fast & Furious 6.”

With such ingenious storylines, this franchise can in all likelihood reach a 10th installment without becoming stale.

However, for now let’s just enjoy this sixth film and prepare for lucky number seven.  Till next time!