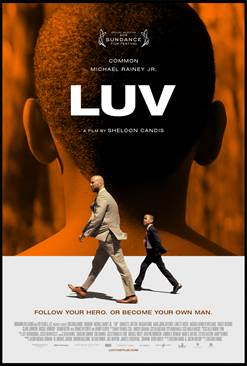 What’s not to love about the Luv film? An A-list cast, timely subject matter and stellar performances makes the movie starring Common a must-see for the urban film lover.

Common stars as Vincent, a ruthless Baltimore killer who gets out of jail early, which makes him a marked man on the streets of Maryland.

Many of his former comrades believe he snitched on them after he was originally sentenced to 20 years of incarceration, he but does less than 10 years.

He plans to go legitimate with an afterhours crab joint in a prime Baltimore location, but does not have the cash needed to clean up his credit and get a $150,000 loan from a local bank.

Vincent is forced back into his shady past with his infamous mentor Fish (Dennis Haysbert) because Vincent needs his capital, despite not needing the trouble that comes along with it.

Michael Rainey, Jr. plays Woody in the Luv film.  He is raised without a mother and a father.  Woody desperately wants to reconnect with his mother who is in North Carolina, but is forced to rely on his ailing grandmother until his Uncle Vincent is released on parole.

After Vincent becomes disgusted at Woody’s lack of confidence around females, he forces him to skip school and spend a day with his uncle to see how real men handle their business.

Vincent teaches him about confidence, professionalism, style and how to protect one’s self and others that are close to him.  He teaches him the dangers of the streets and what it takes to navigate through the perils of daily living in the inner city.

The Luv film does an exceptional job of humanizing the characters.  Many urban films tell the story of ruthless killers as if they have no values, morals or aspirations.  However, many like Vincent desperately want to do better for themselves, but often their past and their surroundings make it virtually impossible to stay on the straight and narrow.

What do you do when you are trying to go legit but your past stands in your way?  It is almost impossible to find employment, and the only way to raise enough capital to branch out as an entrepreneur requires you to engage in the same nefarious deeds that got you in your current predicament.

Furthermore, what do you do when you are just a child trying to be a child?  You had no choice of what family, neighborhood or socioeconomic class you were born into, but you have to grow up fast in order to just make it to your teenage years, becoming a man at only 11 years old.

Nevertheless, what we see in the Luv film is that maturation right before our eyes.  We see Rainey holding his own against actors three and four times his age and we see Common becoming a true actor, not a rapper-actor.

The Luv film shows us that the rap star from Chicago can bring passion and emotion to a role.  We forget we are watching a musician and realize we are simply watching a true artist regardless of the canvass.

Despite the passionate performances by Common and Rainey, their turn in the spotlight forces veteran actors like Haysbert, Danny Glover, Charles S. Dutton and Lonnette McKey somewhat into the background.

Although the film does not suffer from an artistic standpoint as a result of their smaller roles, a film with that kind of star power needs to shine more on those proven stars.

In addition, the Luv film unfortunately paints a sad reality of how an 11-year-old like Woody has to lose his innocence and naiveté because of the environment and the people around him.  He becomes a man because he has to, not because it is time to and that sad reality is all too true in urban America.

Woody catches on fast and becomes a man that his uncle and moviegoers can love.  What Americans will not love, is that his reality is far too common to far too many children in this country.