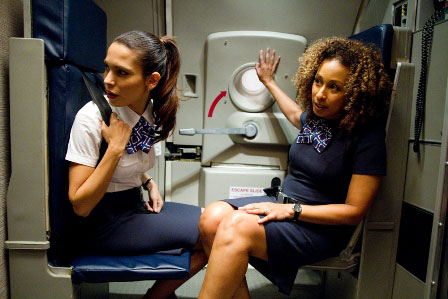 Human beings are complex creatures.  Most, if not all, have characteristics that others admire as well as traits that others detest.

In the Flight DVD, which will be released on Feb. 5, Whip (Denzel Washington) is praised for his heroic talents that land an ill-fated plane, but harshly criticized and ultimately punished for his actions that possibly led to unnecessary deaths.

Whip is forced to confront his demons, in the form of drugs and alcohol abuse, before they destroy him and destroy his relationships with his loved-ones

Flight co-star Tamara Tunie told Regal Magazine that the overall message of the film is self-preservation and self-salvation.

“Are you going to allow yourself to continue down this path of darkness, or are you going to figure out how to bring yourself back from the brink of destruction and save yourself,” said Tunie.  “And perhaps save the relationship of the people around you who love you.”

Although dealing with a tragic and timely subject-matter, the Flight DVD will also make viewers laugh while they grieve and cry.  John Goodman’s role can be described as classic as he adds humor to show how complex tragedy can be.

Tunie said that she enjoys balanced movies that interject humor with drama.

“A message gets across better if there’s some humor injected into the story.  And sometimes life’s tragedies have their moments of funny, of humor, because sometimes it’s just so tragic you have to laugh,” she said.

A more philosophical message is the pedestal that talented individuals like Whip are placed on because of their miraculous exploits in their field of work.  Whip is given every opportunity to escape punishment.

However, Tunie believes that it works both ways in the fact that people like Whip are usually given second chances that others would not receive, but they are also held to a higher standard, and Flight examines that complexity as well.

The Flight DVD and Blu-ray combo pack features special behind-the-scenes footage and will give viewers details on how the filmmakers pulled off what has been described as “the hairiest, scariest, most realistic, and thrilling plane crash in movie history” by Richard Corliss of Time.

Furthermore, the Flight DVD and Blu-Ray combo pack will feature highlights from a Q&A panel discussion on the film.

The Flight DVD will also be available for purchase as a single disc on Feb. 5.

Film lovers who purchase the Flight DVD will not only be treated to the special features, but also to special performances by Tunie, Goodman, Don Cheadle, and Nadine Velazquez, and of course the Academy Award nominated performance of Washington (Best Actor).

Scott Mantz of “Access Hollywood” describes the film as “a gripping, deeply engaging and emotionally powerful drama that features Denzel Washington at the top of his game.”

One can also argue that all of the actors and filmmakers were also on the top of their game, despite being overlooked as a Best Picture nominee by the Academy.

“It should have been nominated,” Tunie explained.

Despite the Oscar snub, purchasers of the Flight DVD will get a complex movie that depicts the complexities of the world and the human condition.  And awards notwithstanding, that type of brilliance makes a film a timeless classic and that’s exactly what Flight is.