A List You Can’t Refuse: Top 10 Gangster Movies of All Time 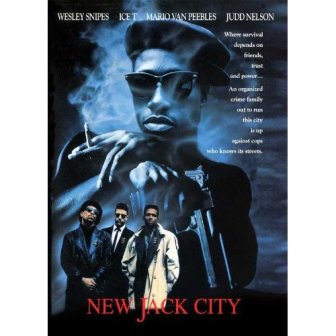 After 22 years, New Jack City still ranks as one of the top 10 gangster movies of all time.

Men, if you do not crave gangster movies, your man card needs revoking.

“Chick flicks,” generally cater to love-struck females, and men will endure those torturous two hours to get close to the woman they adore, but the heart of many men lay in thrillers about organized crime and mafia bosses.

Whether it is an escape from our own boring reality, many men love gangster films because the characters are totally unlike them.  Men flock to theaters to see them on a regular basis, but what are the top 10 gangster movies of all time?

Regal has compiled a list that should have every gangster film fan debating the results.

10) Lawless—2012’s Lawless comes in at number 10 on Regal’s list of top 10 gangster films of all time.  While the film disappointed at the box office, the story of the bootlegging Bondurant brothers from Virginia is a film that a true gangster film fan will love.  It deals with the Prohibition Era in America, which is not often portrayed.  The film centers on the profits that bootleggers were bringing in and crooked law enforcement officials who wanted their slice of the pie.  Tom Hardy plays the role of Forrest Bondurant to perfection and Guy Pearce plays the role of the crooked deputy Charlie Raikes to infamy.  Lawless will have viewers questioning who is on the wrong side of the law, the so-called criminals or the law enforcement officials trying to bring them to justice.

9) Donnie Brasco—One of the most dangerous things a law enforcement official can attempt to do is infiltrate the mob.  Gaining the trust of people who are not wired to be trusting is virtually impossible for someone genuinely dedicated to the mob, but even more improbable for someone who is dedicated to bringing the mob down.  Nevertheless, Donnie Brasco, played to perfection by Johnny Depp, is so believable as a Mafioso that he forgets his true mission and is almost sucked into the gangster lifestyle unwillingly.  As Donnie’s friendship with Lefty Ruggerio (Al Pacino) grows, his marriage and personal life suffers.  Furthermore, his life becomes endangered when the mafia suspects that there is a mole in their organization.

8) Public Enemies—Coming in at number eight on the list of top 10 gangster movies is Public Enemies, a 2009 biopic of bank robber John Dillinger (Johnny Depp) and the FBI agent, Melvin Purvis (Christian Bale), who vows to bring Dillinger to justice.  Public Enemies depicts a time, the Great Depression, when criminals were seen as the heroes and government officials as the enemies.  Women were attracted to outlaws like Dillinger, and the general public was fascinated by their exploits because many believed bank robbers were justified in stealing from the rich.  However, as Dillinger becomes more daring, the FBI becomes more dedicated to bringing him and his empire down.

7) Blow—Drug dealers are ridiculed in our society and rightfully so.  But what do you do when you feel you have no options to better your family but to resort to illegal activity?  In the 2001 film Blow, George Jung (Johnny Depp) watches his father struggle his entire life to make an honest living and provide for his family.  He vows to never be poor like his father and when he moves to California from Boston, he becomes the king of the beach for those looking for the best marijuana.  His cross-country drug operation makes him a legend, but when his operation is placed in jeopardy he loses everything from his wife, to his daughter, to his freedom.  The film does a superb job of showing why people feel the need to get involved in the drug trade and the long term consequences for making such a decision.  For this reason, Blow is number seven on the list of top 10 gangster movies.

6) American Gangster—Black gangsters are not often mentioned alongside the Italian mob, but Harlem’s Frank Lucas became bigger than the mob and his story is told in the biopic American Gangster starring Denzel Washington as Lucas.  Lucas found out a way to import pure heroin to America while also cutting out the middle man.  He was able to load his dope in the caskets of dead soldiers during the Vietnam War.  His success led to obvious resentment from the Italian establishment and his low key personality brought little suspicion to his operation for years.  The efforts of Detective Richie Roberts (Russell Crowe) eventually bring Lucas’ operation down, but his criminal exploits are still infamous throughout New York City four decades later. His legacy of infamy is the reason his biopic is one of the top 10 gangster movies of all time.

5) New Jack City—“See ya, wouldn’t wanna be ya.”  That classic line alone from Nino Brown (Wesley Snipes) is enough to get New Jack City on the list of top 10 gangster movies of all time.  The 1991 classic centers on the crew CMB who monopolize the New York drug market after the crack epidemic hits during the Reagan era.  Killings in broad daylight make CMB feared, and taking over the entire Carter Apartments makes Nino public enemy number one in the eyes of the law.  Twenty-two years later the film is still a classic.  It made moviegoers hate Snipes and proved rappers like Ice-T could act.  And as Duh Duh Duh Man (Bill Nunn) would say, the film was pure, unadulterated genius.

4) The Godfather: Part II—A list of the top 10 gangster movies would not be complete without including something from the trilogy that virtually popularized the entire genre.  In the sequel to The Godfather, Francis Ford Coppola tells the story of how Vito Corleone (Robert DeNiro) rose to power, which accompanies Michael’s ascension as the Don of the Corleone crime family.  The film shows how Michael (Al Pacino) attempts to legitimize the family’s business by investing in Las Vegas casinos, but unfortunately also shows that blood is not necessarily thicker than water in all cases.

3) Scarface—“Say hello to my little friend” and say hello again to Al Pacino as he is becoming a constant on Regal’s list of top 10 gangster movies of all time.  The 1983 classic, made Pacino’s character Tony Montana an icon.  Montana emigrated from Cuba in 1980, when Fidel Castro allowed 125,000 refugees to reunite with their relatives in America.  The American ideals of wealth and greed take over for Montana as he becomes a ruthless and violent drug lord.  However, Montana soon learns the price of power is steep and that illegal enterprises do not last forever.

2) Goodfellas—Climbing up the ladder of an organized crime family is a dangerous undertaking.  Greed and betrayal become commonplace and snitching is sometimes the only way out of a no-win situation.  Our runner-up on our list of top 10 gangster movies of all time is the 1990 blockbuster hit Goodfellas.  In the film, Henry Hill (Ray Liotta) is a small time gangster that is instrumental in one of the biggest heists in American history, but when his partner in crime starts murdering his comrades, Hill soon realizes that friendships are not always forever, and in the mob living comes down to survival of the fittest.  Goodfellas shows that no matter how enticing the criminal lifestyle becomes, it always ends with tragic consequences.

1) The Godfather—Regal’s winner of the top 10 gangster movies is a film you cannot refuse.  The Godfather practically invented the modern genre of gangster movies.  The 1972 smash that starred Marlon Brando and Al Pacino humanizes the Corleone family by highlighting the fact that even though he is engaged in a criminal enterprise, Vito Corleone (Brando) wants better for his son Michael (Pacino).  However, the seduction of the streets is sometimes too hard to resist and Michael is sucked into its trap initially out of necessity.  Like the other films in Regal’s top 10 gangster movies, The Godfather deals with the betrayal that every gangster has to be prepared for, and the fact that every Don’s day in the sunlight eventually is eclipsed by changing times.

So there it is.  Regal’s list of the top 10 gangster movies of all time is complete.  However, the debate is just beginning!