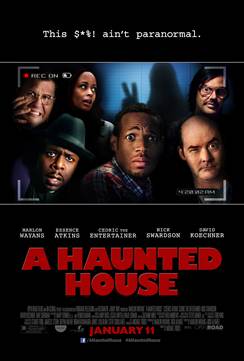 Seeing a Marlon Wayans film without his sidekick and brother Shawn Wayans seems as rare as seeing O.J. Simpson without A.C. Cowlings in the early 1990s.

And seeing a Wayans’ “scary movie” that is not a parody seems even more rare.

Nevertheless, in the A Haunted House film, moviegoers do not get a parody, but a mixture of horror with the typical comedy of the youngest Wayans sibling.

In the A Haunted House film, Wayans unintentionally portrays a non-stereotypical African American man, Malcolm, who is so much in love with his girlfriend Keisha (Essence Atkins), that he will literally tolerate and accept her demons, which unfortunately is very stereotypically true for many men.

“That’s every man,” Wayans told Regal Magazine.  “Every woman got (their) demons.  And that’s every person.  Men, we got our demons too.  But in love, sometimes you put up with some of the craziest stuff ever.”

Un-stereotypically, Malcolm has a live-in pet and performs mouth-to-mouth on his dog when Keisha accidentally kills it on their first day living together.

Also un-stereotypically, Keisha keeps the cremated ashes of her father and brings them with her when she moves into Malcolm’s upscale estate.

Unfortunately for Malcolm, Keisha brings more from her past than her dead father’s remains.

She literally brings a demon with her in the A Haunted House film, putting her relationship with Malcolm in the hands of the devil and out of their control.

Instead of just leaving the haunted house and haunted girlfriend, Malcolm does everything in his power to save his dream home and his relationship with his dream girl.

He calls upon a gay psychic, who is more interested in getting with Malcolm than getting rid of the demon.

Malcolm calls upon a prison-educated priest played by Cedric the Entertainer to perform an exorcism on Keisha.

And he calls upon reality-television wannabe ghost-busters to rid his beautiful woman of the haunting demons.

When the ghost rapes Keisha, Malcolm sees it as another man getting with his woman and he actually feels insecure because a ghost is able to please his woman in ways that he cannot.

What follows are some hilarious (in typical Wayans fashion) scenes involving Malcolm and Keisha’s swinger friends as well as Cedric the Entertainer in an atypical mode.

In one scene, Cedric says that “crazy (expletive) is the best (expletive).”

Wayans told Regal Magazine: “You get Cedric, who is known as a teddy bear, and you put a shotgun in his hand and you watch this man lay it down.”

Nevertheless, the A Haunted House film suffers from a simple and unimaginative script.

It shows Wayans in his typical element, but the star who also co-wrote the screenplay, does not stretch himself in the role of Malcolm, and therefore does not deliver his best performance.

Despite his following as a comedian, Wayans has the talent to do much more than comedies or parodies, and while the movie has its funny moments like the ghost rape scene, the A Haunted House film does not show all that the actor can accomplish in film.