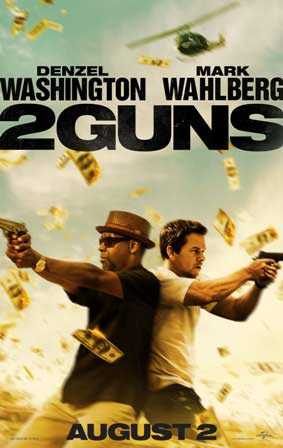 Not your typical police drama and not your typical comedy.  “2 Guns” starring Academy Award winner Denzel Washington and Mark Wahlberg marry the two in a film in which no one is who they appear to be and no one can be totally trusted.

However, when Bobby delivers on his end of a deal for Papi, and the kingpin refuses to honor his commitment to provide Bobby with drugs, the undercover DEA agent has to return to square one in his attempt to arrest the ruthless gangster.

Bobby and Stig (Wahlberg) decide to rob a bank that Papi has $3 million dollars in so that they can have evidence of his laundered money.  But when they pull off the heist, they end up with over $40 million and enemies much more dangerous than the Mexican drug cartel.

Furthermore, more skeletons come out of the closet such as who Stig really works for and whether or not Bobby’s love interest Deb (Paula Patton) is truly loyal to her man or if she is sleeping with the enemy.

“2 Guns” is worth the price of admission because of the star power from Washington and Wahlberg.  Think about it.  When was the last time either starred in a subpar film?

Piggybacking on his excellent performance in “Pain and Gain,” Wahlberg is developing into more than just a dramatic actor, displaying impeccable comedic timing and charm.

And although Washington appears to be going rogue cop like in “Training Day,” his latest performance as a law enforcement official shows a tender side not present in his Oscar winning performance.

The storyline of “2 Guns” has been done numerous times in Hollywood, but not with the comedic genius that Wahlberg displays, and not with someone as legendary as Washington.

In addition, it definitely does not hurt to have an actress as beautiful as Patton portraying a side of her personality that goes against her previous roles.  She effortlessly combines beauty with brains in her role as a law enforcement official.

“2 Guns” plot twists makes sure that the film does not fall into the same formulaic rut as other undercover police films.

The only filmmaking criticism of “2 Guns” is the inability to effectively categorize the film, being that it is part police thriller and part comedy.

Furthermore, “2 Guns” exposes the dirty and violent side of American law enforcement and military.  Watching the film from that aspect makes it difficult to fathom how a country dedicated to freedom could become so corrupt and crooked.

Although it is not the typical police drama or the typical comedy, it is the typical Washington and Wahlberg hit film and definitely worth checking out.