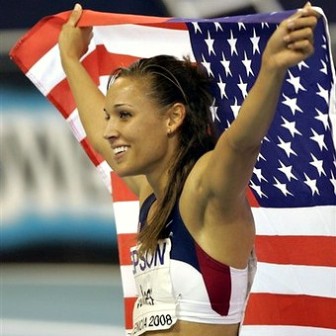 Athletes like track star Lolo Jones have become parental favorites for keeping virginity until they are married (Photo courtesy of olympicgirls.net).

Many honorable things can be said about athletes like Tim Tebow and Lolo Jones who have sworn to be celibate. But can their views and ideals rub off on the next generation?

A plethora of parents are sure to find supporting athletes who support abstinence a great idea. Yet the view from the kids that look up to them is unclear.

With all the exposure to role models such as rappers, singers, and actors/actresses, you would think the idea of celibacy or keeping virginity sounds like a crude joke to today’s youth.  But you might be surprised by what the kids actually have on their minds dealing with the subject of keeping virginity.

“I think you should just wait until you get married,” says 9-year-old Javante’. “It’s what the Bible says and if it’s in the Bible then it must be the right idea.”

Miles Authorlee, a father of two, says, “You have to really respect guys like A.C. Green, who are the most eligible bachelors on the planet and still they choose to keep their virginity until they’re married. Of course I’m OK with letting my kids look up to them because they are positive role models.”

You will have to look far and wide to find a parent who is against the idea of keeping virginity and those who support it, but finding youth who oppose that notion may not be that hard.

“I don’t know, I guess you just let what happens happen. I can say I support it, but temptation is everywhere, especially in high school,” says 16-year-old Ronald.

Ronald went on to explain that when he was eight years old the idea of abstinence was something he thought he would stick with, but now since he has entered high school he has been inundated with all kinds of temptation from his peers.

We all know how big of a deal peer pressure is and what it can do to a young mind. Could it be that kids’ views and opinions change when they get to high school largely due to peer pressure?

“I’ve had a lot of temptations being on the basketball team, and I frankly don’t know how Tebow has done it. You really have to be a strong individual to keep steadfast on such a promise,” says sophomore Houston Sterling High School guard Javier.

There are however some youth that are content with the idea of keeping virginity.

Although there haven’t been many athletes besides Green, Tebow, Jones and supposedly every Brigham Young University athlete except Brandon Davies who have been hip to the idea of keeping virginity, some youth these days have other role models.

“My parents are my role models. They have instilled the idea of keeping virginity in my brain. I really plan to stick with my vow of abstinence,” says Fort Bend (Texas) Willowridge High School sophomore forward Jonathan.

“I plan to stay (celibate until) marriage like my father told me. I feel pressure to violate that promise every day but I feel I am mentally equipped to deal with anything the devil throws at me,” says Fort Bend (Texas) Marshall High School volleyball player Anita.

There are many views on the idea of keeping virginity in the sports world, and there are few athletes who can be looked upon as a role model who take on that challenge.

One thing for sure is that those who practice it have the utmost respect for being an individual and staying true to themselves.

The view of a role model switches from parent to celebrity often in a child’s life, yet a child is more likely to follow the example given to them at home.

Although athletes like Tebow are great, youth are more likely to accept the idea of keeping virginity if it is sold to them by their parents not the media or any other source.

Johnson is a contributing writer for Regal Magazine, a publication dedicated to the African American community.