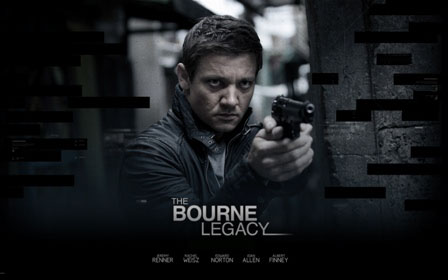 Despite the slow start and the need to revisit the first three films in the Bourne franchise to fully understand The Bourne Legacy film, Jeremy Renner and his co-stars do pretty decent jobs continuing where Jason Bourne (Matt Damon) left off.

It is probably in the best interest of moviegoers to watch The Bourne Ultimatum, but not seeing it will not prevent you from totally understanding The Bourne Legacy film; it will just initially make it harder to keep up.  Actually, the only negative things about the film are its slow start and an absent star, but it makes up for it with a fast-paced ending.

At the beginning of The Bourne Legacy film, we learn that Jason Bourne is back in New York and he is a threat to the CIA’s espionage programs.

Bourne has the ability and knowledge to expose secret programs like Operation Treadstone and Operation Outcome and Eric Byer (Edward Norton) has to eliminate all evidence of the programs, which means eliminating the lives of the spies like Aaron Cross, played by Renner (The Town).

Aaron and other participants of the Outcome program are genetically altered, which includes boosting their intelligence, to spy on the enemy.  The agents are given pills which program their behavior to fulfill every evil desire of the CIA.

However, when Aaron escapes death in Alaska, he realizes the nature of the beast and teams up with Outcome scientist Dr. Marta Shearing (Rachel Weisz) to escape the deadly grips of the CIA.

Marta, blinded by her love of science, does not comprehend the dangerous program she has become involved with and needs Aaron to understand the realities of Operation Outcome.  Aaron, with his genetically-altered intelligence, needs Marta to make him whole again after he runs out of the pills that made him who he has become.

The fast past conclusion of The Bourne Legacy film takes us to Manila in the Philippines as the doctor and patient have to find the ingredients to save Aaron’s mental state, while avoiding capture by CIA operatives and Manila police, which would ultimately save their lives.  The motorcycle chase scene is classic, and fans of Bourne will definitely not be disappointed.

What is missing obviously from The Bourne Legacy film is Damon, and although Renner does a good job in his absence, teaming those two actors would make a fifth installment impossible to resist.

This movie reminds me of the 1980s R&B group The Time when Jimmy Jam and Terry Lewis temporarily left the band.  Yes the next album, “Ice Cream Castle,” was very good, but it did not have the expected swagger of the other albums.  Jason Bourne is that much needed swagger.

Damon initially expressed interest in reprising his role as Jason, but when director Paul Greengrass reneged on the film, so did Damon.

In his stead as director is Tony Gilroy who co-wrote the screenplay with his brother Dan Gilroy.

The Bourne Legacy film does a good job of continuing the momentum, but if the franchise is to remain iconic, a return of Jason Bourne is pivotal.

What the filmmakers have is the new James Bond, as stated many times before, for a generation that is not infatuated with 007 as previous generations, but Damon is the main ingredient needed to maintain iconic status.