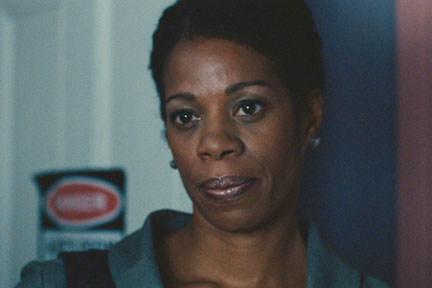 Kim Wayans stars as Audrey in the Pariah movie.

Webster’s defines a pariah as an outcast.  No matter who you are, everyone knows the feeling of being out casted by your friends, family or classmates for your weight, looks or socioeconomic class.

In the Black community, subjecting a family member to harsh treatment because of their sexuality is something that is known, but is avoided at all cost.  For many reasons, discussions of sexuality are so taboo that they are often ignored, as if turning a blind eye will make the situation go away.

The Pariah movie tackles the issue of homosexuality within the Black family structure head-on and shows how difficult understanding life can be if those closest to you do not understand you.

Alike, played by Adepero Oduye is a 17-year-old Brooklyn teen, who is just beginning to find out who she is.  She has romantic feelings for women, but seems unconfident and unsure of herself when it comes to approaching them.  Like many teenagers, she does not want to be pressured by friends and family members into a lifestyle that she is not ready for.

Her family, on the outside looking in, looks like the prototypical Black family.  Her father, who still looks at her like she is daddy’s little girl, is a police officer who appears to be a having an affair.  Her mother Audrey, played by Kim Wayans, is a devout Christian who wants Alike (Le for short) to dress in more feminine attire like her “girly” sister Sharonda (Sahra Mellesse).

Le goes so far as to dress in the attire her mother prefers and then switch clothes to something she’s more comfortable with when she goes to school.

Her sexuality aside, Le is the type of daughter any parent would love to have and be proud of.  Extremely gifted and talented, she is an accomplished poet who is able to graduate high school early to attend a pre-college writing program in Berkeley, Calif.

Nevertheless, her mother can only see one characterisitc and goes so far as to forbid her from seeing her friend Laura (Pernell Walker), who steals the show with her comedic timing.  Like Le, Laura’s sexuality causes a rift between her and her mother, forcing her to move in with her older sister.

Audrey instead prefers for Le to spend time with Bina (Aasha Davis) in hopes that some of her “girly” ways will rub off on her daughter.  Quickly a friendship grows between Bina and Le, but not the type of friendship Audrey probably has in mind.

The Pariah movie paints a vivid picture of the dysfunction that exists in all families, and highlights a dynamic within the Black household that is usually not talked about. That is, can love of faith coexist with love of family, when a family member does not totally adhere to the faith you taught them?

Le’s father is more accepting of her sexuality, but Audrey cannot accept the reality that she is confronted with.  The role of Audrey is a different direction for Wayans, who rose to fame as a comedian on “In Living Color” during the 1990s and she plays it superbly.

The entire cast does a superb job and it will not be long before we see many of them in bigger features.

The only thing missing from the film is that we do not discover if Le’s father is indeed having an affair, which is another element that leads to dysfunction in this family.

The Bible states that “we have all sinned and fallen short of the glory of God,” but His family is always open despite our actions.  And the same should hold true when it comes to someone’s biological family.