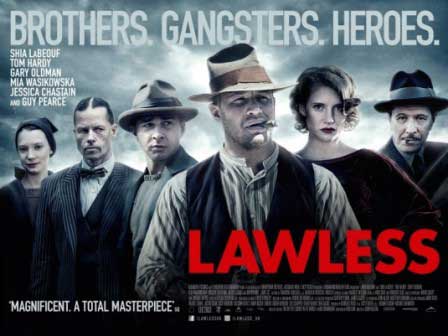 Rarely, if ever, do I call a film flawless.  A film that is shot well, has a great story line and actors perfect for their roles, but that is just what the Lawless film is.  Flawless.

Regal readers know that this publication is partial to the gangster film genre.  But bias aside, the Lawless film does an excellent job of portraying an era in history, Prohibition, in a way that does not force it into the box of period pieces.

The Lawless film tells the semi-true story of the Bondurant boys, a band of bootlegging brothers who keep their country Virginia town wet when most of the country has gone dry due to federal laws banning liquor.

Like many gangsters or black market businesspeople, the Bondurant boys work with impunity in their region with the cooperation of law enforcement officials.  But when a new deputy comes to town, he demands part of their profit in order for them to have the authority to continue their operation.

Many bootleggers in the country town adhere to the new requirements, and those that do not find themselves tarred and feathered, literally.

The Bondurant brothers, who have never run from confrontation, refuse to play by the rules, finding themselves in the “dog house” of the new deputy Charlie Rakes, played to evil precision by Guy Pearce.

The brothers Bondurant consist of two like-minded criminals and one black sheep who yearns for respect.

Forrest Bondurant, played to perfection by Tom Hardy, has a legend as big as Virginia and a grunt that is classic.  Legend has it that he had his neck slit open by some Chicago gangsters, but was strong enough to walk miles on his own to the hospital.

Forrest is also brutal with his secret weapon, his brass knuckles, that makes him practically invincible in fisticuffs.

Howard Bondurant (Jason Clarke) is a psychopathic criminal with no vision for the future, only an appetite for violent destruction.

Lastly, young Jack Bondurant (Shia LaBeouf) is the wimp of the bunch, and the punching bag for every Bondurant hater in rural Virginia.  He has the vision for criminal activity to earn an exorbitant amount of money for the family, but does not possess the requisite grit to earn the respect of his older brothers.

Despite that lack of respect, Jack is able to earn the family the type of money they have never seen because of his bold ambition.

The baby Bondurant forges business relationships with other gangsters.  He is also able to purchase the luxury automobiles and fancy clothes that the gangsters from Chicago flaunted regularly during Prohibition.

However, he also draws the wrong kind of attention to himself after he begins courting the preacher’s daughter Bertha Minnix (Mia Wasikowska) and manages to create another enemy for the Bondurant family.

However, the Lawless film makes the bad guys the sympathetic heroes and crooked law enforcement officials like Rakes the hated enemy.