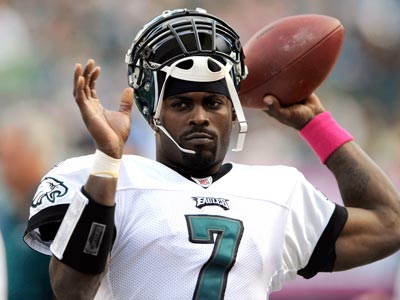 If Michael Vick wins a Super Bowl ring, he would become the second Black quarterback to achieve the feat (Photo courtesy of BusinessInsider.com).

What Would Vick Super Bowl Ring Mean to Black America?

Michael Vick is one of the most beloved Black quarterbacks in history. He faced much scrutiny for his dog fighting case in June 2007, in which a great deal of the Black population felt he was dealt with unfairly. This season he has a great chance at redemption and a chance at his first Super Bowl ring.

In the early 2000s, there was undoubtedly no other Black quarterback that had more of an effect on the Black community than Vick.

He captured the eyes of sports fans of all colors when he came into the league in 2001 with mind blowing pocket escapes and scintillating plays at the quarterback position.

He had all the skills that any athlete could have at the time. Then out of nowhere, allegations surfaced in June 2007 linking Vick to an illegal dog fighting ring on his property in Hampton, Va.

“The Vick issue” was a widely debated topic in a great number of sports forums, barbershops, and many public hangouts. After speaking with a plethora of individuals, it is apparent that the popular opinion of the case is that Vick was wronged and should not have served two years for fighting dogs and gambling on dog fighting.

“I don’t think they should have (taken) two years out of his career or life for that matter just for some dogs. In certain parts of the world dogs are a delicacy,” said 23-year-old Lizzete Turner.

What would a Super Bowl ring for Vick mean for the Black man in 2012?

Would it serve as a sign of redemption or a beacon of hope for young Black men around the country?

“I believe it would vindicate all the wrong done by the justice system to Vick,” said 24-year-old Laruen Allen.

“One case cannot undo all the wrong done by the government to Black men (because) there are still brothers serving time in the pen for crimes they didn’t do,” said 22-year-old college student David Polk.

Nevertheless, Vick has once again captivated the NFL audience with the same vigor and raw talent that made him a star when he first came into the league.

It would seem that the time away from the game has paid off for Vick but many feel that there could have been much more written in his story book if he had not been placed in jail for two years.

“I’m rooting for Mike because if he would not have been put in jail for animal crimes then there might have been a chance he would have already had his Super bowl ring,” said Jay Wroten.

“As a Black man I always root for Black athletes, but I find myself more inclined to root for Vick given his current situation,” said 42-year-old barber Mac Williams.

It is apparent that many Blacks feel that by winning a Super Bowl ring Vick would lift a small monkey off of Black men’s backs everywhere, and take a shot at the proverbial prison system that has so many of our Black men in its clutches.

Although opinions vary on whether or not Vick’s actions were wrong or not, one conclusion can be made by many African Americans, Vick needs his Super Bowl ring.

Johnson is a contributing writer for Regal Magazine, a publication dedicated to the African American community.