Book Review: The Mata Tribe and the Quest for the Black Rose 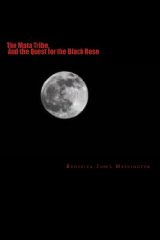 The Mata Tribe and the Quest for the Black Rose is a thrilling horror book from first time novelist, and Houston native Brodrick Washington.

It is about the search for the remains in an ancient temple being heavily guarded by descendants of a remaining ancient tribe of brutal werewolves still roaming the Amazon jungle. They want to protect the remains at all costs.

The Mata temple is a “sadistically sophisticated temple,” and there’s an ancient sword involved called the Black Rose. The Mata tribesmen will do anything to keep it and other legends secret from anyone who dares search for it – including a group of inquisitive archeologists led by Dr. George Azevedo.

Washington takes us deep into the Amazon in The Mata Tribe and the Quest for the Black Rose with Azevedo’s group of young archeologists from Prescott Vice University in Quantico, Va., along with a group of armed mercenaries, soldiers and guides for protection.

They are on an excavation of the remains of The Mata Temple built by the ancient Indian Mata tribe. With information and a map provided by a dark stranger, who makes it clear that should Azevedo accept this quest, his return to civilization would not be guaranteed.

Of course that makes this even more intriguing to Azevedo. After all, he comes from a long line of famous archeologists including his great ancestors Monte and Angelo Azevedo. Monte and his brother Angelo, both went on to be the founders of Prescott Vice University.

This chief of the Mata tribe was known to have made a blood sacrifice to the Wapa Dada, a sort of dog-man-type creature (a werewolf) to have full control and power over the massive Amazon forest.

With a group of archeologists as large as this one searching for this guarded temple in one of the most beautiful but forbidden places on the entire planet, there are plenty of subplots, danger, action, murder, pagan idols and enough cannibals to make you lose your appetite immediately, or go completely vegetarian.

The archeologists also come face-to-face with natural obstacles such as giants spiders, mosquitoes and alligators, as well as a host of tribesmen and devious tour guides and mercenaries who will stop at nothing to make one of them a sacrifice and feast. With all this going on, who has time for a romance?

Oh yeah, there’s also a buried treasure involved too that everyone either wants to protect or quite naturally get their hands on.

The Mata Tribe and the Quest for the Black Rose is a very good and thrilling page-turner and hooks you right from the beginning. It has everything a reader would want in a spine-chilling novel.

The characters go from being bright-eyed optimistic archeologists to a group of people just fighting to stay alive.

In The Mata Tribe and the Quest for the Black Rose, when you’re voted off, you’re voted off permanently! The subplots alone will keep you interested and wondering which character is going to get it next.

The Mata Tribe and the Quest for the Black Rose is an excellent read and is available now on Amazon.com.