Battleship Film Good, But Not Unsinkable 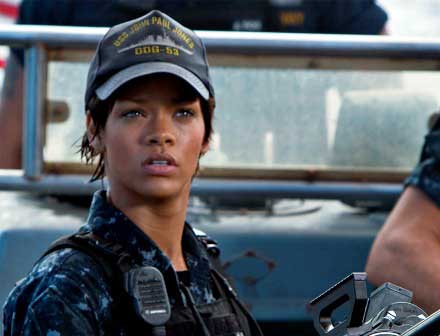 Rihanna shows potential as an actress in Battleship, but needs improvement.

You Can’t Sink My Battleship

You did not have a real childhood if you did not play the battleship combat game or never saw the commercial where children bragged, “You can’t sink my battleship.”

Playing that game was a right of passage for children growing up in the 1980s, but can nostalgia alone make for a successful film?  In recent years, we have had television shows and video games transitioned into films, but a board game?  I cannot remember a film being adapted from a board game, but that is exactly what director Peter Berg is attempting in the Battleship film.

The Battleship film begins as two separate story lines that eventually intertwine into one.  NASA discovers “Planet G,” an Earth-like planet, which they believe is conducive to supporting human life.  It is far enough away from the sun, but not too far, to provide a similar experience to the human experience on Earth.

NASA decides to transmit a message to Planet G in an attempt to make contact with the planet and learn more about their new discovery.  One scientist jokes that if there is life on Planet G it will be like Christopher Columbus and the Indians, except earthlings would be the Indians.

Alex Hopper (Taylor Kitsch) and his brother Stone (Alexander Skarsgard) could not be more different.  We meet the brothers at a local bar, celebrating Alex’s 26th birthday party.  In his short life he has not yet figured out what he wants to do with his life, but figures out plenty of ways to find trouble, especially when beautiful women and burritos are involved.

Fed up with Alex’s shenanigans, Stone encourages him to join the Navy, where he begins to excel on the ship and on the soccer field.  He has a budding romance with Samantha (Brooklyn Decker), the admiral’s daughter.  Samantha and Hopper are madly in love, but he is petrified of her father Admiral Shane (Liam Neeson).

Despite his maturation in most areas, he still has a temperamental streak that leads to him being on the brink of expulsion from the service.

The only thing that “saves” Hopper is the one thing that could potentially destroy the entire planet.  The inhabitants of Planet G, responding to NASA’s transmission, invade the planet destroying much of China, eventually setting up shop in the Pacific Ocean.  The aliens, lizard-like creatures, have no problem whatsoever destroying the Destroyer ships that the Navy uses, but have a much harder time sinking the old-school battleships of yesteryear.

The battle scenes in the Battleship film are amazing and the special effects are superb.  The only drawback from the film is that it is too slow in developing, as the writers try to introduce the storyline before the action begins.

The acting sometimes is not excellent, but people usually do not buy tickets to see great acting in action films.  Filmgoers will also get to see R&B songbird Rihanna test her acting chops as Petty Officer Raikes.  Rihanna does not do a terrible job in the Battleship film, but definitively needs improvement as a thespian.

The Battleship film also uses the same formulaic storyline for most films involving aliens.  In these films, aliens are always seen as more powerful and dangerous than human beings. Why can’t it be the other way around for a change?

Alien films always end with a human being saving the world, and the Battleship film is no different.

Nevertheless, the film is a winner and the only thing that could probably sink this film is The Avengers, which is currently sinking all competition in its path.